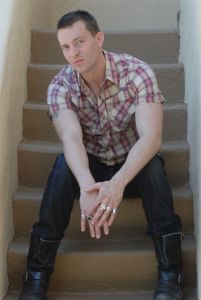 Already an accomplished musician, Levi Kreis may be on his way to becoming The Prince of All Media.   Kreis was raised in East Tennessee and now calls L.A. his home, and he’s currently in Chicago playing Jerry Lee Lewis in the hugely successful, critically acclaimed musical “Million Dollar Quartet”.  People worldwide have seen him on TV: in “The Apprentice” in 2005, and just last June on the Tony Awards with his “Million Dollar Quartet” cast mates.  The out star also has a new movie in the works, and a new album named “Where I Belong”, in which Kreis believes he has finally found his true voice.  And what a voice it is!  Kreis’ singing is intense, and he really pours his soul into his delivery.  Just listen to the track “Nothing At All”, or the sexed-up “Ain’t Nobody” for proof.  “Stained Glass Window”, another gem, features church organ and choir-inspired vocals in the background.  A big highlight on the CD is the autobiographical, crowd-pleasing anthem “No Apologies”:
“I might be country, I might be poor,
I might have sang so long for Jesus, that you say I got soul;
I might get trashy, I might be as simple as can be,
But I got my roots, I got my pride,
And I got no apologies!”

LK: Feeling separated so often from those you love.  That’s the hardest for me.  It can be lonely.  So, there’s your honest answer!

Don’t let Levi Kreis get lonely!  Check out the man and his music at: