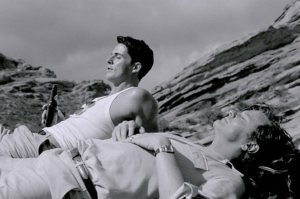 Considered by many to be a classic of gay literature, Christopher Isherwood’s 1964 book “A Single Man” makes the transition from novel to film courtesy of openly gay fashion designer Tom Ford, in his directorial debut.  The simple theme of the novel is grief and loneliness: a middle-aged man known only as “George” goes about his daily ritual of life while mourning the death of his lover.  Given that this was the early sixties (Times they were a-changing… but not that fast!), we can only imagine that because this relationship was a “love that dared not speak its name”, the main character’s torment must have been greatly magnified.  Regardless of the decade the movie was set in, however, the human feelings remain the same– and George’s emotional challenges should resonate with any viewer who’s ever undergone a similar experience of loss, or who has to go home to a house that’s suddenly empty.

“A Single Man”, the film, takes place over the course of a day.  Colin Firth plays the titular role, English professor George Falconer– a Brit living in America.  George is meticulously planning his suicide right down to the last detail.   Via flashback, we meet his youthful lover of 16 years, Jim (Matthew Goode).  In one early scene of supreme acting, Firth first learns of his partner’s accidental death via a phone call by Jim’s family member, who adds polite yet stinging insult to injury by telling George that “only family” are invited to the funeral.  In a cinematic stylization, the flashback scenes of George’s happier days are warmly and brightly lit, while the scenes of his current melancholy existence feature more dulled lighting.  Later on in the film, we meet George’s friend and former lover: the appealingly over-the-top Charlotte (Julianne Moore), also a Brit.  While Moore’s character is occasionally campy (She smokes pink Sobranie cigarettes; and in one scene when applying her makeup, she appears to be channeling her inner drag queen.), Moore and Firth’s scenes together feature some of the finest acting and most poignant scenes in the movie.  George also finds himself to be the object of intrigue of one of his students, Kenny, played by Nicholas Hoult.  (With a chiseled face and body to match, Kenny seems to have come straight out from an Abercrombie & Fitch ad, if Mr. Ford will forgive the comparison to another designer.. Incidentally, Hoult’s character is always lit in that same warm, bright light I mentioned earlier.) The youth seems to want to get to know his professor on a more personal level.  Teacher and student do meet up for a session of nude swimming and then drinks at George’s apartment.  What happens (or doesn’t happen) between them, as well as the scene that follows after that, is pretty heavy… and very open to interpretation.  Audiences may have hoped for a conclusion that was a little more, shall we say, “gay” (“Gay” as in homosexual, and as in happy…), but I have no doubt that Ford’s choice of this ending was likely faithful to the novel…  as well as to the time period the movie is set in.

The movie is a feast for the eyes.  “A Single Man” lovingly recreates the fabulously distinctive decor of the early 60’s, starting with the men’s and women’s fashions and styles (Love those lacquered hairdos!) right down to the scenery– from the cars to the vintage coffee machine in the office that sold joe for 15 cents a cup.  Modern movie-goers, affected by mass ADD, may be put off by the movie’s slow, deliberate pace; It almost seems like Ford wants the audience to take their time to appreciate the visual aspects of the film and to soak in the characters’ thoughts and motivations.  The film never sacrifices substance for style, however; It’s an impressive debut for Tom Ford and a triumph for actors Colin Firth and Julianne Moore.

“A Single Man” is now playing. See more at http://www.ASingleMan-movie.com.