WATCH IT! Movie Review: How Gay is "Nine"? 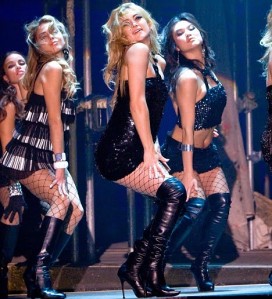 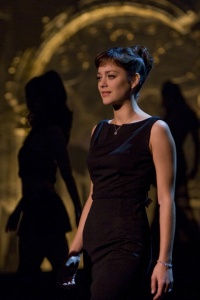 Maybe it should have been named “Anche Molte Donne, non Abbastanza Tempo” (“So Many Women, So Little Time”).  Wow! Girls, girls, girls!  First off, I must say that “Nine” is a flamingly heterosexual movie.  How ironic, considering that most straight men would never see a movie musical anyway, unless they’re going with their wives or girlfriends.  In the filmed version of the popular musical of the same name, Guido Contini (Daniel Day Lewis)–a neurotic, middle-aged Italian filmmaker– is having a case of, shall we say, “directile dysfunction”.  In a career marked by cinematic hits and misses, he’s trying to make his newest film: “Italia”.  His creative endeavor is complicated by an identity crisis as well as his turbulent personal life– specifically, the women in his personal life.  They include his lusty mistress Carla (Penelope Cruz), his star/muse Claudia Jensen (Nicole Kidman), his glamorous late mother (Sophia Loren, who appears to him in visions), and his long-suffering wife, Luisa (Marion Cotillard).   Along the way, “Nine” gives us a glimpse of how European mores are changing with the budding sexual revolution: The Church officially condemns Guido’s movies for their sexiness, yet all of the young priests are fans of his; and, it seems like everyone is married but has a lover or two on the side.  Unfortunately, the background story of “Nine” ultimately sags… but this is a musical, so no one is buying a ticket for the plot.  One of the film’s biggest credits may be that there’s some hope that American directors are s-l-o-w-l-y learning how to bring s-e-x-y to the big screen (and– some would say– to appreciate real, earthy female standards of beauty), the way their European peers have been doing for years.  It helps, I suppose, that the film is set in Italy in the 1960’s. Compare the va-va-voom sexiness of Cruz, Kidman, and Black Eyed Peas singer Fergie (as Saraghina– a voluptuous, gravel-voiced hooker seared into Guido’s childhood memory) with a lot of the ghetto-style, webcam-fueled vulgarity that we call “sexy” nowadays, and you’ll hopefully know what I mean.

So… how gay is “Nine”?  Not very.  But, before I get accused of promoting the heterosexual lifestyle, I’ll add that the thrill for the gay guys comes with the all-out musical numbers, the costumes, and those splendido Italian settings.  Arguably, most of the songs are unlikely to penetrate the American consciousness the way songs from other musicals (like “Chicago”) have, but it’s still a lot of fun to watch the large cast of underused, A-list actresses sing them.  The high points are many: Fergie’s “Be Italian” is a show-stopper; Kate Hudson (as an American reporter) has finally found a good role; and of course, there’s Sophia Loren.  At 75, she proves that female sexiness can be ageless.  “Nine” gets better as it progresses, probably because the audience will soon dismiss the paper-thin plot and concentrate on those flashy, expensive musical sequences.  And, maybe the movie doesn’t have to be so straight after all: The site of Penelope Cruz rolling around in lingerie will definitely stimulate some 11-year old straight boys to an early puberty, but may also inspire the imagination of some drag queens who still hold the art of burlesque in high regard.  Similarly, Marion Cottilard’s striptease song (“Take It All”) may be ripe for reinvention as a new anthem for male strippers and go-go boys worldwide. For many of those stripperboys, it will surely give “Nine” a double meaning!