THE VAMPIRE DIARIES: A Rock Star Comes Out– Officially! 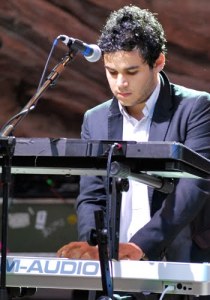 THE VAMPIRE DIARIES: A Rock Star Comes Out– Officially!

Here’s some pop culture news you can sink your teeth into: Another popular rock musician has come out.  Rostam Batmanglij, of the uber-popular Brooklyn-based indie rock band Vampire Weekend (He plays keyboards and guitar, and does backing vocals.) confirmed that he’s gay in a recent interview with “Out” Magazine.  Moreover, Batmanglij (pronounced BAT-MONG-LEECH) spoke about the queer perspectives of some of his songs, such as “Diplomat’s Son” from the Vampire Weekend’s latest album “Contra,” (Check out these lyrics: “That night I smoked a joint, with my best friend. We found ourselves in bed. When I woke up he was gone.”…Oh, don’t we all know that feeling?!)  Another song, “I Wanna Be Your Boyfriend,” (no relation to The Ramones’ song of the same name, FYI…), which Batmanglij recorded with his musical project Discovery, was intended to be something of a gay anthem. (“I started sleeping in your bed, but I woke up on the floor; I did your laundry while you slept, and hung it up beside the door; I want to dress you in the morning, in last night’s clothes; I want to be your boyfriend, but I don’t want anyone to know”) The rocker’s public revelation is actually not news to some.  Batmanglij has actually been out for a while.  Music gurus have pointed out how when “Rolling Stone” profiled the band a while back, the journalist for the mag noted that Rostam, interviewed in his Brooklyn apartment, said he was heartbroken because he had just broken up with his boyfriend.

Batmanglij may have had his heart broken, but America loves its vampires… and Vampire Weekend.  In 2007, the band’s song “Cape Cod Kwassa Kwassa” was ranked 67th on “Rolling Stone”‘s envied list of the “100 Best Songs of the Year”. Vampire Weekend was declared “The Year’s Best New Band” by “Spin” Magazine in the March 2008 issue, and were the first band to be shot for the cover of the magazine before releasing their debut album.  That debut album was released in January 2008. It peaked at Number 17 on the Billboard 200. Two tracks from their debut record appeared in the popular 2009 bromance comedy “I Love You, Man”.  On March 6th, 2010, Vampire Weekend are scheduled to appear as the musical guest of “Saturday Night Live”, with host Zach Galifianakis.

Batmanglij told “Out”:“With that song (“I Wanna Be Your Boyfriend”), I was having fun, but at the same time it was honest — those lyrics are meaningful to me, they come from my heart. I was disappointed when it didn’t become a gay anthem, but, you know, it’s not too late.”  It’s never too late for romance, either: Any word on whether this cute 26-year old artist is single?