WATCH IT! EASIER WITH PRACTICE Sex, Lies, and Cellphones… 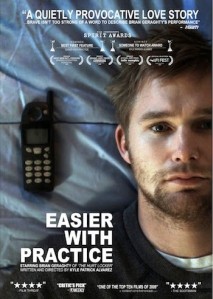 In the era of Facebook, texting, skype, live chat, and streaming video, the idea of a movie based on phone sex seems a little anachronistic in 2010.  However, it is very plausible in this story, considering our main character.  Geraghty’s Davy strikes us as the kind who would flee like a scared jackrabbit the minute he thought that his object of desire may be watching him back-– let’s say, if the two hooked up via webcam rather than phone.  Actor Brian Geraghty is an attractive guy (See “The Hurt Locker” for another side of this performer.), yet he effectively plays a man crippled by shyness and the inability to “connect” with someone face to face.  This is especially apparent when you compare him to his cocksure younger brother, or watch him in the party scene.  Overall, “Easier With Practice” is a minimalist film centered around one character– and while it has its some good moments of drama, comedy, and pathos, I can’t help but wonder if this film may have worked better as a staged play– it’s just a bit too static.  The moment of this movie that would likely be of the greatest interest to my particular readers is when Nicole finally consents to meet Davy– but even to hint at any detail would ruin the surprise.   Let’s just say it’s a worthy payoff… but you’ll wish it could have been a better, more dynamic ride getting to it.