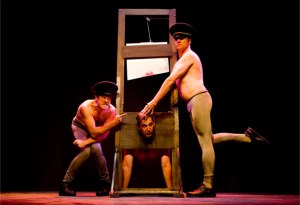 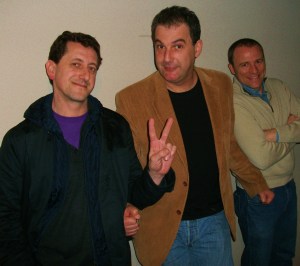 Ready to spend a night in prison? “666”, the off-Broadway debut of Spanish comedy troupe Yllana, ain’t no ordinary jail story. From the too-cute-for-words little white police dog sniffing around to the hardcore sounds of the German band Rammstein that greet us, we learn very soon that this ain’t no ordinary theater experience either. Meet the men of “666”: four prisoners in orange jumpsuits separated from the audience by a very angry electric fence. The quartet of inmates treat us to ten death row-themed vignettes—from the aptly-named “Electric Musical Chairs” to the ballet-inspired (really!) “Guillotine Dance”. With a nonstop parade of cartoonish violence and scatological sight gags, “666” is lewd, crude, and rude … and funny as hell. (Think HBO’s “Oz” on nitrous oxide.) “Sweet Dreams”, for example, is a comedic dream about going on a random shooting spree (Admit it now, haven’t we ALL had that deep-down forbidden fantasy from time to time?). In addition to the shocking bits, the boys show us some impressive tricks: The segment ”Hanging Out” will have you wondering just how the Hell (ahem…) the guys did their seemingly gravity-defying antics. For the finale, “Inferno”, the men behind bars exchange their orange prison outfits for devil horns and two-foot-long dildos that seemingly have a life of their own. It’s about time I warn you that the electric fence separating the guys from the audience will NOT necessarily protect you any longer. The last scene makes “Puppetry of the Penis” look like “The Little Mermaid”. Be afraid. Be VERY afraid!

The four actors of “666” (Raul Cano, Fidel Fernandez, Joseph Michael O’Curneen, and Juan Ramos Toro) are comediantes de expertos: Their slapstick skills are superb, and the intimacy of The Minetta Lane Theater allows us to really appreciate the guys’ endlessly elastic range of facial expressions. These boys work really hard to make us laugh, and they succeed. True, the attendees may feel just a li’l bit guilty about finding such antisocial behavior –like the men splashing urine on each other– seem so hilarious. However, “666” reminds us that the job of comedy is to provoke, shock, and sometimes even offend … as well as to make us laugh along the way. And, in case you’re wondering about that little white dog at the beginning of the play, rest assured: No dogs were harmed in this production. We can’t say the same about the poor (or lucky?!) little white lamb…