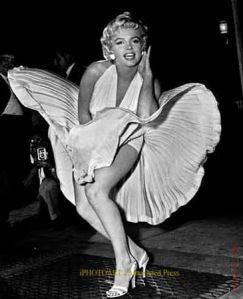 Did you get a good tax return? Well, here’s a good way to invest (or blow…) some of it: Darren Julien of Julien’s Auctions stated last week that several items of the late sex goddess and gay icon Marilyn Monroe will be auctioned off in June during the Hollywood Legends Auction at Planet Hollywood Resort and Casino Las Vegas. The highlight of the auction is a couch that the star of “Gentlemen Prefer Blondes” and “Bus Stop” laid on while she was receiving psychotherapy in the early ’60’s. Other items include never-before seen photos from her much-beloved 1959 drag classic “Some Like it Hot”, and (drum roll please…) an X-ray of Monroe’s much-beloved chest and pelvis. Say WHAT? Julien estimated the value of the X-ray to be up to $1,200. Marilyn’s X-rays are up for auction? Come on now! When I was a kid I had a major bonethrob for swimmer Mark Spitz in his Speedo, but that doesn’t mean I would spend over a week’s salary on his kidney ultrasound… or head CT… or printouts of his lab work. Just what would I do with them? I am bust-ing to know what kind of perv would pay over a grand for radiologic pin-ups of ANYONE—even Marilyn, Elvis, Jimmy Dean, etc. Some fans apparently want to get deep inside the world’s most famous blonde—but not in the usual straight guy way!