“‘GLEE’: THE MUSIC: THE POWER OF MADONNA”: AS GAY AS IT GETS! Music Review 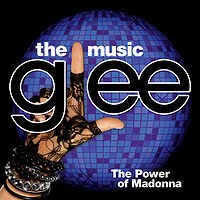 As sung by Lea Michele (“Rachel”) and other “Glee” cast members, the Gleed-up version of the 1989 Madonna hit “Express Yourself” has the same escapist, “get up and dance” vibe that marked the Queen of Pop’s earliest hits. Ms. Michele also has the same breathy, girlish, coquettish quality in her voice that the young Madge had back in the day. “Express Yourself”, the kickoff track of “’Glee’: The Music: The Power of Madonna”, reminds of the reason why we fell in love with Ms. Ciccone back in the ‘80’s. It’s just … fun! As any of her fiercely loyal fans will tell you, Madonna has always been notoriously protective of her music. At the same time, she has always had her finger on the pulse of pop culture. It’s no mystery why the Mother of Re-Invention would want to jump on the “Glee” juggernaut. Madonna’s music and the hugely popular TV show have shown to be an impressive match; as evidence, Jane Lynch-as-Sue’s TV performance of “Vogue” has no doubt been one of the most watched, shared, and analyzed videos over the last few weeks, with the latest guilty pleasure being to examine Maddy’s version and the ”Glee” version side by side. Almost all of the seven songs on “The Power of Madonna” work well, mostly because the diva’s music is so deeply engrained in our consciousness, and because the melodies stay the same– never drifting too far from the original radio-friendly pop originals. To put it another way, don’t expect the boys and girls of William McKinley High School to experiment too much. That said, there are some nice creative touches on this EP. The second track is a cute, youthful mash-up of “Borderline” and “Open Your Heart”, with vocals by Lea Michele and Cory Monteith (“Finn”). For “Vogue”, Jane Lynch gives us a sassy and cool “So what?” kind of re-working. She even throws in a couple of “Glee” in-jokes during the song’s emblematic rap segment. The kids’ energetic, high-spirited “4 Minutes” takes on a slightly harder edge than the 2009 original, and listeners will no doubt agree that the Gleesters even take it one step beyond the Madonna/Justin version. “What It Feels Like for a Girl”, arguably the most under-appreciated song on the 2000 album “Music”, is done by the five boys in the cast. The effect is, dare I say it, quite sincere and heartfelt. The only moment I had issues with came with “Like A Virgin”. The song, so perfect for Madonna back in 1984, strikes me as just a bit too ripe for these seemingly unblemished high school students to sing, especially in the ‘Rah! Rah!” kind of style they perform it in. (Am I being horribly naïve?) Having it redone with both male and female vocals is an interesting touch, however. The CD ends with “Like A Prayer”, which I’ve always believed was Madonna’s most beloved hit. Again, the kiddies do it justice.

As you may have guessed, both Madonna fans and Gleeks (and, especially, the sizable overlap between) will eat this music up. But what does Madonna think? You’ll have to ask her yourself, and to my knowledge, the superstar hasn’t commented yet. But I have no reason to believe she wouldn’t be impressed. Whether or not she’d agree, the cast of “Glee” are part of her growing brood of spiritual children.