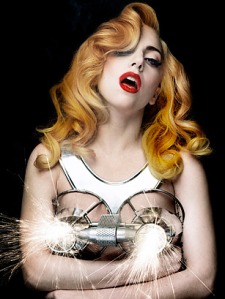 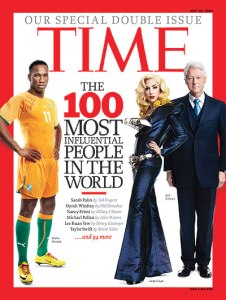 LADY GAGA’s NEW #1:
The Singer Voted Top in Entertainment by “Time” Magazine
The influence of Lady Gaga– her music, her renegade style, and her philanthropic achievements– can be seen, heard, and felt all over the world: from the DJ playlist at any of New York City’s hottest nightspots, to those huge MAC billboards in Times Square, right on down to Christina Aguilera’s latest video “Not Myself Tonight”(to which E!Online’s Peter Gicas hilariously joked, “Christina Aguilera, Lady Gaga just called. She wants her video back!”). The 24-year old can now put another accomplishment under her 26-inch sequined belt: She was named the most influential entertainer in the world by “Time” Magazine in its annual 100 listing for 2010. As a singer who’s used to being surrounded by gay men, Gaga would be happy to have Elton John, Marc Jacobs, and Neil Patrick Harris on the list as well… as well as Hollywood “It Boys” Robert Pattinson, Zac Efron, and Ashton Kutcher. Oh, and by the way, the Top 100 also features Barack Obama, Edward Kennedy, Hillary and Bill Clinton, Nancy Pelosi, Oprah Winfrey, and GOP centerfold Sarah Palin. (Incidentally, Gaga’s presence on the list prompted some bloggers to sarcastically point out how the pop tart was alongside Dr. Douglas Schwartzentruber, who’s working to develop a vaccine against cancer. Debate, anyone?) The gay icon was no doubt honored thanks to her influences in gay rights, HIV/AIDS awareness, and, of course, the world of music and video art. Specifically, she reminds her peers (as well as the generations of artists before her, and young artists currently on the rise) that it’s an entertainer’s job to break the rules. The Lady’s tribute in the magazine was written by one of Gaga’s influences– Cyndi Lauper, who no doubt knows a thing or two about gay rights, HIV/AIDS awareness, and breaking the rules herself. Lauper and Gaga had recently teamed up with MAC AIDS Fund’s VIVA Glam campaign, which raised over $160 million to fight against AIDS and HIV, and bring awareness about the diseases to women around the world. Lauper writes about Gaga: “I first heard the name Lady Gaga through a mutual friend. He couldn’t stop talking about her. Then I heard about her music, and I thought, Wow, I love this kid. An artist’s job is to take a snapshot– be it through words or sound, lyrics or song– that explains what it’s like to be alive at that time. Lady Gaga’s art captures the period we’re in right now.” The Girl Who Just Wanted To Have Fun adds, “When I see someone like Gaga, I sit back in admiration. I’m inspired to pick up the torch again myself… Being around her, I felt like the dust was shaken off of me.” Wow! It’s one thing to be an influential artist. But when an performer clearly influences the movers and shakers from a generation ago who influenced her, THAT’S something to be proud of. To quote from Gaga’s latest CD, I’m “so happy I could die”!