ON THE RUGBY PITCH and OUT of the CLOSET: “Sports Illustrated” Profiles Openly Gay Rugger Gareth Thomas 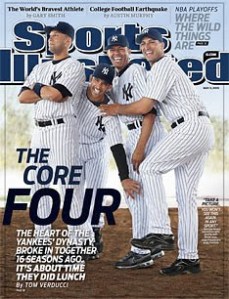 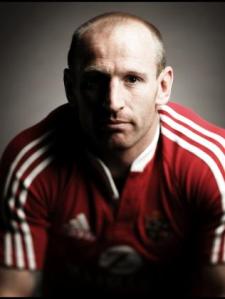 ON THE RUGBY PITCH and OUT of the CLOSET:
“Sports Illustrated” Profiles Openly Gay Rugger Gareth Thomas

If you can pull your eyes away from the playful boys-will-be-boys hetero hijinks of Derek Jeter and his buddies on the cover of the new issue of “Sports Illustrated“, in the upper left hand corner of the popular sports mag is the teaser “The World’s Bravest Athlete”. The article is a nine-page profile of 35-year old Gareth “Alf” Thomas, a 6’3”, 225 lb openly gay rugby player from Wales. For most of you reading this blog right now, it may be bewildering that simply being out is necessarily a “brave” thing in itself. But apparently, in the world of professional sports, being out of the closet is still considered by many to be one of the last taboos, at least for the men. True, others have done it in the past, from football player David Kopay in 1975, to baseball player Billy Bean in 1999, to the NFL’s Esera Tuaolo in 2002. Thomas’ fellow rugger, Australian Ian Roberts, came out in 1995. According to author Gary Smith, however, Thomas is currently “the only openly gay active athlete in a major men‘s team sport“. Now, it’s impossible to quantify how many other guys are playing on teams where their homosexuality is known amongst their teammates (an “open secret“, if you will…), but even if Smith’s statement about Thomas is a bit of a boldly unprovable claim, the sheer ramifications behind this rugger’s distinction are pretty astonishing. It makes you wonder, given the modest advances our community has made in the past 15 or so years notwithstanding, if we have had ANY social progress in this issue since Mike Piazza called a press conference in 2002 to announce… his heterosexuality.

Anyone who is familiar with rugby know that it’s a brutal sport. I learned this firsthand when I played with New York City’s Gotham Knights RFC a few years ago for four seasons. In one match, I broke my nose (still unfixed), and in the match exactly one week later, my best bud Jon suffered much more trauma when he broke his arm. When we went for our doctors’ visits together, everyone assumed we were a couple who had some serious domestic violence issues. As Thomas himself describes, rugby is “No helmets, no pads, just balls!”. To the casual observer watching the game, it may seem like the only guideline is “Kill the guy with the ball!” In actually, rugby is governed by very specific skills and laws (Never say “rules”!) that are quite different from American football, which many may be tempted to compare it to. Few sports pack as much passion, intensity, and camaraderie into an 80-minute match as does rugby, often called the ultimate team sport. In countries like England, Ireland, Australia, South Africa, and New Zealand, rugby isn’t just a game. It’s a way of life. Yet, rugby is still very much a renegade sport (Some may call it a “cult”) in the United States. It is rarely played in U.S. elementary and high schools, and only occasionally at the college/university level. Unless they’ve played in college, most U.S. athletes have had no experience with the sport. One of the consequences is that some American men and women, including gay men and lesbians,
discover it relatively later in life. Gay and gay-friendly teams are present in many American cities. IGRAB, the International Gay Rugby Association and Board, is dedicated to encouraging lesbians and gay men worldwide to play rugby. The Bingham Cup, named after the late rugby San Francisco player and 9/11 hero Mark Bingham, is an international gay and gay-friendly rugby tournament held every two years.

According to the “Sports Illustrated” profile, the physical pain that Gareth Thomas suffered through his years on the pitch– a nose broken five times, both shoulders fractured, eight missing teeth, and an average of three concussions a year– was nothing compared to the anguish the star faced being in the closet and feeling like as much of an “alien” as his nickname would suggest. To “deal” with the anguish, he drank more, got more tattoos, worked out even more furiously, became secretive and isolated, and even got married– until the athlete decided, “Enough is enough!”

Fortunately, this story has a happy ending. Thomas’ teammates, fans, family, and even his ex-wife were overwhelmingly supportive. Nevertheless, the reaction by two of his fellow rugby brothers quoted in the magazine are very telling about the situation of openly gay men in sports– and the larger issue of what defines being a “real man“. Lee Byrne, a former national teammate of the rugger, states, “We probably love him (Gareth) even more now because of how hard we know it’s been for him.” Cool. But another former teammate, Trevor Brennan, commented, “For me, he was the most ungay person who ever was. Our coach would point to him and say, ’There’s an example of a real man.’” Which presumes, of course, that there is one definition of “real man”, or what exactly “gay” or “ungay”. In an analogy that Gareth Thomas would hopefully appreciate, perhaps it’s not which balls you play with, or how big those balls are… but having the balls to do the right thing.