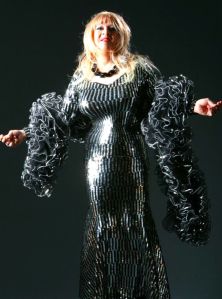 As any fashion expert will tell you, a lady can never have too many hats! New York City drag star Lady Clover Honey wears many hats– among them performer, hostess, socialite, writer, and political activist for GLBT rights. Clover was the first and only transgendered correspondent on a nationally broadcast series, and the first transgendered person to act as Maestro Conductor at New York City’s legendary Carnegie Hall. A bona fide Queen of All Media, our Lady has appeared on TV and on radio shows, acted in movies, performed live on stages big and small, and hosted events ranging from burlesque to her hugely popular Friday night Bingo at The New York City LGBT Center. Clover can now put another achievement under her sequined belt: This month, she has stepped into the role of Charity Divine– the larger-than-life, strong-willed (and just a little crazy!) wife of the town’s Southern Baptist minister– in the critically acclaimed comedy “When Joey Married Bobby”. The juicy role was originated by another iconic New York City drag star, Lady Bunny. It was not easy catching up with Lady Clover Honey. This week alone, in addition to turning out her comedic skills on the stage, the star was also filming segments for Under the Pink Carpet TV, writing about all things pop culture for the online magazine Dish Miss, meeting with officials of New York City TV, flirting with the boys at The Ritz, and hosting Beareoke at Rockbar. The mutli-tasking star took a short break to freshen her lipstick– and to speak with Jed Ryan about her acting debut on Broadway:

JR: Hello, Clover! Congratulations on your new role in “When Joey Married Bobby”!
LCH: Thank you so much! This is very exciting!
JR : How do you feel about stepping into Lady Bunny’s legendary slippers?
LCH: It’s amazing to think that we could possible play the same roles! Lady Bunny is legendary and does have very big feet. I mean those are big shoes to fill – figuratively of course! Actually, I’ve always admired her and her strong presence and comedic talent. But if anyone can take over her roles, it’s me. But still I feel a little like Eva taking over for Zha Zha.

JR: (Laughs) You have conquered so many areas in the entertainment world– including TV, movies, and stand up comedy. This is your Broadway debut? How do you feel about that?
LCH: I’ve done theater before, but in downtown venues like Cherry Lane theater in Greenwich Village. Plus, I’ve sang and conducted at Carnegie Hall and I’ve done Stand-up at the famous Caroline’s on Broadway. However, being cast in a critically acclaimed comedy by award-winning playwrights in the actual Broadway Theater district is an honorable and thrilling first for me. And a girl my age doesn’t have too many fists!
JR : Charity Divine is a flamboyant, strong, Southern woman: a steel magnolia, but she’s also a little crazy too! Who do you model her character after?
LCH: I essentially model Charity after Lady Bunny, who is originally from the South and has been know to be a bit of a power-wielding in the Wigstock days! But Lady Clover Honey adds her own unique style to the character, making her more classy but with a slightly trashy edge. Oh, and don’t forget prettier.
JR: No doubt! Are you going to be wearing your own wardrobe?!
LCH: Yes, in the second act, I reveal a dazzling reflective golden ensemble. I also loan a fabulous colorful gown for the maid to make a surprise entrance in!
JR: I’m jealous! Now, the play is a comedy, but it also touches a hot political subject: gay marriage. Where do we stand on that issue as we enter the middle of 2010? How do you feel about the issue being explored in pop culture, like in “When Joey Married Bobby”?
LCH: I was extremely sickened and disgusted when both the New York and New Jersey Senates rejected legal same-sex marriage last year. We have to keep the subject and the message alive and not let those hateful and bigoted Senators destroy equality and civil rights for millions of people. We’ll keep on loving – and – marrying and hopefully and eventually the law will treat all citizens equally, like it is supposed to do.
JR: Reviews of the show have praised stuntwoman-turned-actress Tina McKissick. What is it like working with her?
LCH: Tina is amazing and has so much energy and charisma. She’s actually short, but even working alongside me and other cast members who are over 6-feet tall, she metaphorically stands taller than anyone in the room. She was also extremely helpful, taking time for me and other new cast members to learn their lines. And has been so warm and kind to help me fit into an already established cast.
JR: Where else can we see Lady Clover Honey? I hear you’ll be appearing in Caspar Andreas’ new movie…
LCH: I’m seen on the weekly television series Under the Pink Carpet seen in the New York City and Philadelphia metropolitan areas, reporting on the Drag and Transgender events. In Film, I’ll be in Casper Andreas’ “Violet Tendencies” starring Mindy Cohn (“Natalie” from NBC’s “Facts of Life”) and can currently be seen in his “A Four Letter Word” and “The Big Gay Musical” on DVD. I host the City’s largest and most fabulous monthly Bingo game at The LGBT Community Center. I host Karaoke nights at Rock Bar in Greenwich Village and will be hosting events for the annual Fresh Fruit Festival this Summer.
JR: Wow! Thanks Clover! See you on Broadway!
LCH: Thank you… and as the song goes: “Tell all the guys on Forty Second Street that I will soon be there!” Or was I there already? Don’t ask!

Get tickets and see much more about “When Joey Married Bobby” at http://www.WhenJoeyMarriedBobby.com. And, get a sweet taste of Lady Clover Honey at http://www.LadyCloverHoney.com!