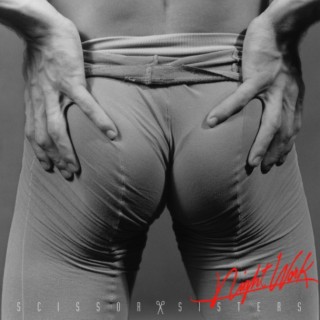 THE SISTER-HOOD OF THE GOLD LAME PANTS
Scissor Sisters: “Night Work”
“I want you to funk me; Your battleship has sunk me; Dip me and you dunk me, Set my body free!“ New York City natives The Scissor Sisters– Jake Shears, Babydaddy, Del Marquis, Ana Matronic, and Randy Real— have always delighted their fans in mixing musical and spiritual flashbacks from different eras together into the same pot, all seasoned with glitter. One thing’s “fer sher“: The band must have had fun in the studio while recording their newest album, “Night Work”. Don’t worry, boys and girls– you’re all invited to the Sisters’ retrosexual play party, even if the band doesn‘t let us entirely in on the joke. We wonder … Is the music on “Night Shift” (A) a tribute to the ‘70‘s and ‘80‘s? Or (B) a parody of those eras? The answer is (C) both… and then some. The booty-shaking, no-holes-barred “Any Which Way”, for example, is a throwback to the days of clams on the half shell and roller skates. The feverish Saturday night song, which throws in a musical homage to everything from Ms. Ross’ “Ain’t No Mountain High Enough” to Michael Jackson’s “Thriller”, and features vocals by Kylie (!), comes across as the best song Barry Gibb of the Bee Gees never wrote. Lead singer Shears even adopts Gibb’s unmistakable falsetto. But when we suddenly hear Ms. Ana Matronic seductively chanting, “You know baby, when I was taking my pantyhose out of their egg this evening I thought: ‘I’m going to find that man with the right shade of bottle tan, a man that smells like cocoa butter and cash.’ Take my anyway you like it; in front of the fireplace, in front of your yacht, in front of my parents, I don’t give a damn baby. Just take me!”, we then realize the Sisters must have had their tongues planted firmly in their cheeks (And I don‘t mean the cheeks displayed on the cover art.) with this one. It’s not just the era of bell bottoms and platform shoes that gets the Scissor Sisters treatment. “Running Out” evokes the 80’s icons The Talking Heads, although the song’s lyrics (“We’re running out… of money; of love; of luck; of patience; of air…“) couldn’t be more suitable for the post- possession-obsession world we’re living today. “Harder they Fall” sounds like the spiritual sister song to the band’s Seattle-based cousins, The Dandy Warhols. Regardless of intentions or influences, “Night Work” is a crowd-pleaser, with each unique track offering a nice serving of the Sisters’ self-indulgence. Of the album’s 13 tracks, the twin stand-outs are the anthemic “Fire With Fire “ and the intensely romantic “Skin Tight”, where Mr. Shears sings and emotes with raw passion. If you don’t find yourself having a moment of spiritual elevation with the grand, soaring “Fire With Fire”, then honey, you may as well as be dead. The same way it took us a while to figure out the hidden meaning of Cyndi Lauper’s 1984 hit “She Bop”, you’ll listen to Track 2, “Whole New Way” (as in “I found a whole new way to love you!“), a few times before you realize that the song is about the joys of… backdoor sex! (Oh my, did I just give that away?) There’s much more to love, from the tense, brooding “Sex and Violence“ to the full-out grand finale “Invisible Light“, featuring spoken word by Sir Ian McKellen (!) But love it or hate it, perhaps the most emblematic track is “Something Like This”. As it puts the listener under its robotic hypno-pop spell, the song fucks with its own structure, twisting its assorted influences to the point of undefinability. Now, THOSE are the Scissor Sisters we know and love… or at least, just wanna have a hot tumble with.