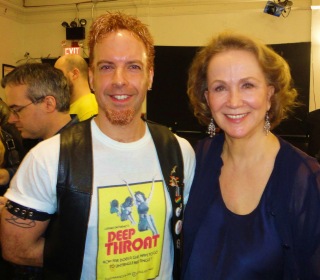 JUST WHEN YOU THOUGHT IT WAS SAFE TO TAKE OUT THOSE WIRE HANGERS…
Actress Rutanya Alda Dishes About “The Mommie Dearest Diaries”.

The Queen Mother of all camp classic movies, “Mommie Dearest”, is no doubt one of the most oddly beloved movies in American pop culture history. At the time of the movie’s release, however, many film reviewers were quite unkind. One critic who saw through the mass heckling of the film was writer Andrew Sarris of the influential NYC newspaper “The Village Voice”. Sarris named Rutanya Alda as “Best Supporting Actress” in 1981 for her work in the movie. Twenty-nine years later, Alda has proven to be one of the most prolific actresses of her generation. Her lengthy list of acting credits is quite diverse, with movie work ranging from the critically and commercially successful “The Deer Hunter” in 1978, to the 1983 underground hit “Vigilante“ (just released on Blu-Ray because of its enduring cult popularity), to little-known flicks like the 1985 horror movie “The Stuff”. More recently in her career, the 68-year old star has been seen on many hit TV shows, including “Law and Order”, “CSI”, and “Cold Case”. To lovers of classic horror movies, the actress is one of the most recognizable faces of the genre, having appeared in such thrillers as “Amityville 2: The Possession”, “When A Stranger Calls“, and Brian DePalma‘s “The Fury“. Rutanya Alda is probably best known, however, for her role as Carol Anne, the long-suffering but unyieldingly loyal personal assistant to Faye Dunaway’s Joan Crawford. Alda recalls of the film, “It was a dramatic movie shoot, to say the least!… Not one person was ‘in on the joke‘, until the movie was released!” On Friday, November 19th, The New York Film Academy hosted an evening with the busy actress. The event was moderated by NYFA Directing Professor Bryan Norton (who admitted that the event was maybe just a little bit of a roast too!). Clips from many of Alda’s movies were shown, one of which was a scene from a truly bizarre 1984 horror cheapie called “Girls Nite Out“. In this one, Alda appeared (Warning: spoiler alert ahead…) in a gender-bending dual role, one of which was as a killer wearing (Get this…) a bear suit! The event also featured a Q&A session with the audience… an audience which included screenwriter Justin John Costello (“Amongst The Living”), actor/producer Joe Zaso (“Virus X”), and Buzz from CampBlood.org, a site which describes itself as “Queer Horror Movie Central”. Throughout the evening, Alda told enough stories to keep any dedicated cinemaphile (like me) at full attention. Perhaps the most tantalizing biggest piece of movie trivia from the night was that Ms. Alda provided the voice-over for Angie Dickinson’s infamous orgasm-in-a-taxi scene in Brian DePalma‘s 1980 thriller “Dressed to Kill”. I asked Alda about her thoughts of the current state of women in the movie industry: How does a the seasoned actresses like Rutanya Alda feel about the film world today, with its almost obsessive focus on youth? (One of my fellow writers referred to the current scene as “Megan Fox Hollywood”). Not surprisingly, Alda has observed that many youngsters want to become stars but don’t want to have to work for it. Part of that work, she states, is studying: studying people. She also bemoans the loss of camaraderie between actors that she remembers having. (Alda believes this may be due in part to our living in the “electronic age”.) The actress was also brutally honest in describing her experiences on the set of certain TV shows. Often, she observed, the actors who are the stars of their shows are less interested in making their scene work than they are in showing themselves off. Interestingly, she still proudly refers to herself as an “actress” when many have opted for the gender-neutral term “actor” for both men and women.

But of course, everyone still wants to know as much as possible about “Mommie Dearest”. It’s clear that Rutanya Alda has embraced her role in the camp classic– as opposed to her co-star Faye Dunaway, who has distanced herself from the movie as much as she can. This is pretty obvious if you explore the extras on the DVD of “Mommie Dearest”. While Alda appears and speaks openly about her experiences in the film, Dunaway is conspicuously absent. Fans of both the book and the movie (and, as you know, there are a LOT of us!) will likely have a pop culture-flavored climax when Rutanya Alda‘s new book, “The Mommie Dearest Dairies”, comes out next spring. Among the juicy tidbits that Alda reveals is that over an hour of the movie was cut. In a true sign that there’s no justice in the world, the whereabouts of that footage is currently unknown. The actress acknowledges that many of the most ardent fans of “Mommie Dearest” are gay men (“They know all the lines better than I do!“ she declared.), and she’s hoping that the enduring popularity of the movie with our community will lead to healthy book sales. Well, here’s one thing: This gay man will be waiting on line for my copy. The book will go well with a serving of very rare beef…