WHAT DOES WORLD AIDS DAY MEAN TO YOU? Gerald McCullouch and 11 other movers/shakers answer the question!

In honor of December 1, World AIDS Day 2010, Jed Central has selected several hard-working members of our community– including actor Gerald McCullouch and 11 other movers and shakers– to answer the question “What does World AIDS Day mean to you?”

Gerald McCullouch, Actor: “World AIDS Day is a time to acknowledge our community’s resilience, yet mourn the loss of countless human beings and the intense effect their loss has had on society.”

(Gerald is still riding the wave of being honored as one of this year’s OUT 100 and starting up rehearsals this week for the LA production of “Daddy”, which opens on Jan 8th at the Hudson Mainstage. The play has been revamped with a new creative team on board, and they’re hoping to bring this production back to NYC for an Off Broadway run. Visit www.DaddyThePlay.com for more. Gerald can also be seen in “Bear City”, now on DVD.)

Tony Sawicki, Producer/Journalist/Screenwriter: “Did you know that there is a church in Topeka Kansas (the Westboro Baptist Church) that is so full of hatred, vitriol, and ignorance that they actually travel the country and go to the funerals of AIDS victims? There, where family members are suffering deep pain from their devastating loss, these pillars of the Lord carry cruel signs and picket, hurling barbs at funeral attendees to the effect of, “John deserved to die and to rot in hell for being gay and having AIDS.” World AIDS Day is important for any number of reasons, not the least of which is to comfort devastated loved ones and commemorate the loss those who left this earth long before their time. But the day is perhaps most important to me because it stands in direct contrast and opposition to the venomous message purported by horrific, nefarious groups like the Westboro Baptist Church.”

(Tony is Producer of “Under the Pink Carpet” for New York City TV. He is also Recipient of 2010 Fresh Fruit “Fruits of Distinction” Award for his work in the GLBT community. Visit http://www.underthepinkcarpet.tv/)

Lady Clover Honey, Queen of All Media: “Although treatments for those living with HIV and AIDS has made tremendous progress, the crisis is far from over. Its vitally important to keep on talking about the issue to make further progress and to honor those who have passed on, and those who continue to live with HIV. Its also relevant to keep faith and hope burning bright, and to remember the ways to stop the spread of new infections.”

(Lady Clover Honey can be seen on Under the Pink Carpet TV in your living room throughout the week, as well as in person all over NYC! Visit http://www.ladycloverhoney.com/.)

Terry Christopher, Singer/Songwriter/Activist: “World AIDS Day is a day to remember those we have lost to this terrible disease, and acknowledge those who continue to fight the day-to-day challenges of living with the disease while they pursue fulfilling, active, vital, healthier lives. Word AIDS Day is also a time for me to reflect on the efforts I can make on a small or large scale to bring more awareness to the fight of HIV. It’s also a reminder to me and for each of us that we need to work to ensure that there is a day– hopefully not to far ahead in the future– when we can look back on this AIDS worldwide epidemic as a thing of the past and know that for those we have lost, we fought exhaustively in memory to bring this disease down once and for all.”

(Award-winning performer Terry has just completed his third year raising funds [$353,000.00] and awareness for the HIV/AIDS Services of the LGBT Center of NYC via the Braking The Cycle AIDS Ride. He is currently running the 2nd Annual Winter Clothing Drive for Sylvia’s Place in NYC. Visit www.TerryChristopher.com.) 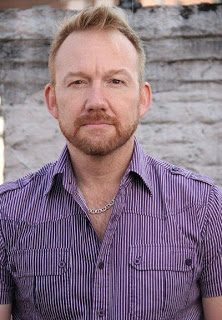 Will Clark, Activist/Actor/Promoter: “For me, World AIDS Day is a time not only of refection of the men and women whom AIDS has claimed over the past 30 years, but also as a way to mark how far we’ve come in treating it. This year we’re celebrating the triumph of spirit at the Will Clark Show with a night to benefit the AIDS Service Center, an organization that provides food, clothing and a job bank for the homeless with HIV/AIDS.“
(Well-known man-about-town and fund-raiser extraordinairre Will Clark produces and emcees “The Will Clark Show featuring Porno Bingo” at Pieces in NYC on Wednesday nights at 8pm. Visit http://www.willclarkworld.com/.  Photo of Will by Gustavo Monroy.)

JD Doyle, Producer/Radio Personality/Queer Music Collector: “I feel like I am holding a camera and keep pulling it back, to include more in the image. As I’ve been through, during the late 80s and early 90s, the loss of a partner and all my close friends (unfortunately, not a unique experience), I always think of the personal losses. Then I immediately jump to mourning all those lost in the gay community and what they could have created for our culture, and then try to take in what the world has lost. It’s a day remembering the grief, anger, sympathy, activism, education and hope. I have a huge website called Queer Music Heritage, and for this purpose would only like to send folks to a special three-hour show I did, “Songs About AIDS: www.QueerMusicHeritage.com/Nov2007.html.“
(JD is Producer of the monthly radio show Queer Music Heritage. Visit his amazing website at http://www.queermusicheritage.com/.)

Damon L. Jacobs, Activist/Author: “World AIDS Day means taking time to honor my friends who are living with this disease, and those who are no longer here. It is a reminder to me to take responsibility for doing my part to end this epidemic so no other loved ones have to die. That action might be discussing obstacles to practicing safer sex with friends, educating others about the HIV vaccine trials, or donating time or money to a cause that is proactively serving individuals living with HIV.”
(Damon is a licensed marriage and family therapist. He does education and outreach in NYC for the current HIV vaccine trials through www.HopeTakesAction.org. He is also the author of the new book “Absolutely Should-less”. Visit www.Shouldless.com.)

James V. Jones, Activist: “World AIDS Day is a time of mixed emotions for me. It’s a day to reflect on all the people that have touched my life: those who have lost their lives to AIDS/HIV, and to celebrate the ones still with me… and to educate and stop future outbreaks of this disease. It’s also a time to remember that this is a worldwide epidemic, not just here in America.”
(James is the newly sashed Mr. Leather Akron 2011.  He is a Member of The Rangers in northeast Ohio and set to become President of this club in 2011.He is also an Associate Member of the Iron Eagles and the Ohio Boys of Leather.) 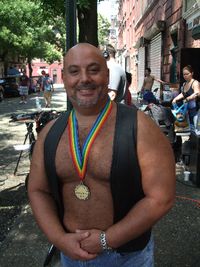 Joe Mannetti, Activist/Journalist/Perfomer: “World AIDS Day is a time to remember that the fight against HIV/AIDS is not over until there is a cure and a vaccine. It is a time to remember that people are still getting ill and dying because of this disease. Younger people are getting infected, and older HIV/AIDS survivors are suffering from the side-effects of long-term medication use as they age with the disease.”

(Joe is Mr. International Daddy Bear 2009, an Ambassador of Goodwill for the DAB the AIDS Bear Project, and one of the most visible spokesmen of the international Bear Community.)

Gerard Mawn, Activist: “World AIDS day marks another year without a cure and my 25th anniversary since organizing the first medical video conference on AIDS in Washington, D.C. This year we must regrettably acknowledge that there’s still no cure and pledge to stop new infections by acting responsibly in casual sexual encounters. Use condoms every time you have sex.”

Heriberto Oquendo Jr,  Activist/Performer: “To me, World AIDS Day means a chance to reflect on friends/family that I have lost over the years. In addition, it reminds me of the amazing friends and newfound family I have met over the years as an HIV prevention advocate/educator. I continue to strive to educate the youth about this pandemic. Finally, it reminds me of the work that still needs to be done… “

(Heriberto is Mr. Metrocub 2011. Visit him at www.HeribertoOquendoJr.com and www.MrMetroCub2011.blogspot.com. Photo of Heriberto by Adam Woomer.)

Samara Riviera, Journalist/Performer: “Well, first off, I don’t like how they call it ‘AIDS Day‘. It should be more like ‘Health Awareness Day’ or something more positive. But what it means to me is a reminder to try and stay negative, try to stay healthy, and a reminder to practice safe sex in case somewhere along the way I forgot.”
(Samara’s trans-interest webzine is www.VivaLaRiviera.com, which features party pictures, videos, and celebrity interviews… putting the “T” back in “GLBT”. She can also be seen on the weekly live webshow www.Justin.tv/DivasLive on Mondays at 10 PM.) 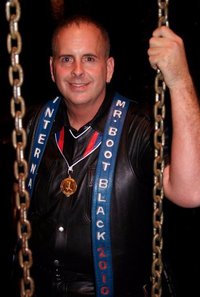 Tim Starkey,  Activist: “On the 23rd World Aids Day, I hope people will take a moment to process in their hearts the significance of this global epidemic on our past, present and future. Honor our past as we hurt for the people we have lost. Fight ignorance and prejudice today for the 33 million people who live with HIV infection… and most importantly, have hope for a future free of HIV.