SO MANY GOWNS, SO LITTLE TIME!

The Imperial Court of New York Brings Timeless Glamour to The 26th Annual Night of 1,000 Gowns. 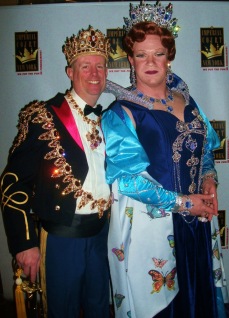 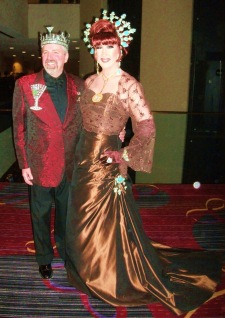 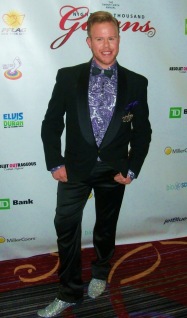 Just how many fabulous frocks will you see at The Imperial Court of New York’s (ICNY) legendary Night of 1,000 Gowns? Even the most astute observer may stop counting when he or she reaches the triple digits… and that’s BEFORE many of these ladies change into their second or even third wardrobe selection. Of course, it’s not just the “girls” who get into the act. The men rival their sisters with equally over-the-top ensembles… from full formal Leather to looks inspired by vintage royalty through the centuries. It’s a photographer’s wet dream: Seemingly anywhere you point your camera, you’ll get a fabulous shot.

There was certainly no shortage of glitz, glamour, or gaiety at this event, which started in the evening and lasted way past midnight. The Night launched with the Presentation of the Flags and a greeting by Gary Cosgrove (H.I.M. Emperor X Gabriel Della Notte), ICNY President. Then it was on to the first Imperial Performance of the evening: “Welcome to Wonderland”, performed by The Court. It was a fittingly over-the-top choice for the ICNY’s most important night of the year. For those of you not on top of your theater trivia, that song was one of the few memorable numbers from the not-so-memorable Broadway show “Wonderland” from 2011. Indeed, it proved to be an appropriate anthem; for that night, the New York City Marriot Marquis was transformed into its own unique Wonderland: an empire populated by colorful characters and larger-than-life situations. (Mercifully, despite all the royalty, there was no Queen of Hearts demanding, “Off with their heads!”) This was a soiree where everyone who attended got to feel like bluebloods; a night where Imperial Court members from as far away as Alaska and Canada got to click cocktail glasses with New York City‘s regal family. The first Court member I spoke with was, appropriately enough, H.I.M. Empress I Sybil The First, AKA Sybil Bruncheon. She told me, “What is amazing is that so many people got caught up in the FUN of the Imperial Court. People ask ‘What is The Imperial Court?’, and I say, ‘It’s kind of like Mardi Gras, but for every OTHER city in the country.’ Whereas New Orleans has its own Mardi Gras, we have a Mardi Gras here. We elect our own Emperor and Empress, and Dukes and Duchesses, and Counts and Countesses, and Marquis, and Earls… and all the other major cities do as well. So, you have people from Seattle, Portland, Chicago, Boston, Houston… all over the country! It’s very exciting. I believe there are 83 Imperial Courts in the United States right now. Eighty-three Imperial Courts, all throwing their own Coronations and Balls. There are only 52 weeks in the year! So, there’s always a Ball going on SOMEWHERE in the United States raising money for charities. It’s cool! This is New York, and we do it well! I love the other Courts and the other Balls… but this is the one that everyone comes to every year. It’s beautiful. BEAUTIFUL! The Marriott Marquis is a wonderful hotel to hold it at. My Coronation was 26 years ago at the Ballroom of The Waldorf Astoria. But we have now been at the Marquis for many years, and it’s a wonderful, wonderful place to throw this in!” 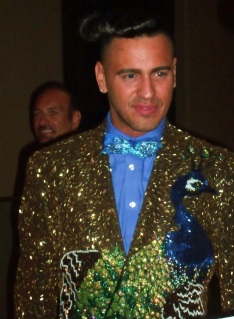 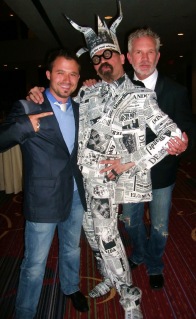 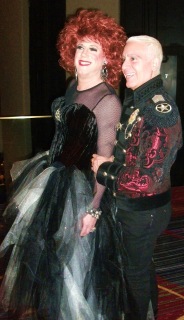 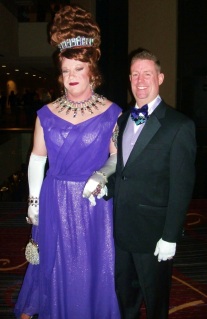 Members of the Court then proceeded to walk down the red carpet alongside celebs from all venues of entertainment: TV (Miguel Allure of “Jerseylicious”, daytime drama diva Ilene Kristen), fashion (celebrity hair stylist Eric Alt), nightlife (uberpromoter Sir Mark Nelson, the omnipresent Amanda Lepore), music (singer Sir Ari Gold), and more. Attendees were treated to a wide variety of live entertainment, from a performance by the cast of “Chicago” (Amra-Faye Wright belting “All That Jazz” encircled by a troupe of shirtless men and sexy women) to the self-proclaimed “Cuntess of Comedy” (and Honorary ICNY Chair) Lisa Lampanelli. When Ms Lampanelli was asked about her affinity for the GLBT community, she responded “You know what? I thought the cornholer community enjoyed me because they feel like outcasts and so do I as a human being. And then some queens told me, ‘No, no… We just like MEAN GIRLS!’ So, either way, they still pay for tickets to my show and I’m happy!” Amen! Other performers that night included Adam Barta, Reina, Teresa Genecco, Ebonee Excell, and Sarah Atereth. Singer Kelly King, who performed the National Anthem that night, told me, “I feel I was born from the womb of a drag queen! So, I definitely feel an affinity and a kindred spirit with the drag queens. Everything I’ve learned about show business and about putting myself together comes from them. They have my heart. If only I could be one (Sigh!)… but I don’t have the parts!” Awww! Well, at least she has the voice!

Of course, the night wasn’t just solely about pageantry and partying. The Imperial Court has been committed to community service and raising money for philanthropic causes such as GLBT equality, HIV/AIDS awareness, and the interests of GLBT youth. Many of the members reiterate how the Court puts the “fun“ in fundraising. This year, the beneficiaries of the event were the NYC chapter of P-FLAG (Parents and Friends of Lesbians and Gays) and New Alternatives, which provides a safe space for homeless GLBT youth living in New York City. It is estimated that ICNY has raised approximately one and a half million dollars in their 26 year history. A great deal of money raised comes from The Night of 1,000 Gowns’ famous Silent Auction, which this year featured such diverse items as jewelry and vacation packages, to a fabulous portrait of the late great Divine (who certainly knew a thing or two about transcending gender!). 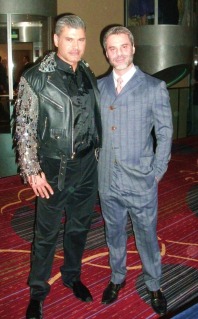 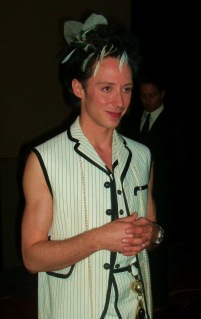 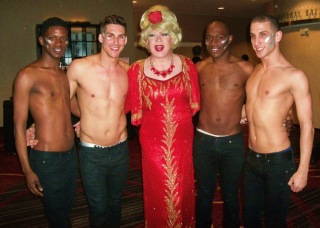 One of the ICNY’s Honorary Chairs present that night was skater Johnny Weir, author of the book “Welcome to My World”, who knows how to expertly balance being a celebrity, athlete, AND fashion icon. He told me, “I am training for the next Winter Olympics in Sochi, Russia. I just made that decision earlier this year and I’m literally training every day– so for me, to even get off one night from my coach to go out is a big deal. But, I couldn’t miss this event tonight. It’s a chance to get fancy, it’s a chance to give back, and I needed to be here! My training is the main thing that‘s happening, and I’m working hard to make a strong, competitive comeback. And, the second season of my TV show ’Be Good Johnny Weir ’ is coming to LOGO this year!” When I tell him, “Johnny, be BAD. We like you better that way!”, he retorted, “Well, that’s the whole point. I’m always bad. That’s why the show is so good!” Other Honorary Chairs named this year are Tabitha Coffey, Elvis Duran, Lauren Rae Levy, Rose McGowan, Chris Sarandon, and Joanna Gleason. Photographer/director Mike Ruiz was the Recipient of The Imperial Diamond Award for his contributions to the GLBT community.

Later on that night, attendees got to enjoy one of the Night of 1,000 Gowns’ most deliciously anticipated traditions: the Venetian hour dessert buffet (That was a photo opp in itself!), which was– at the risk of overusing a common clique– fit for a king (or, more accurately, an emperor and empress!) With sweets like that, who needed dinner? But the true climax of the night was the Coronation of the new monarchs, when Emperor XX Vanity Society and Empress XXV Pepperica Swirl passed the crowns to Imperial Crown Prince Royal Ritz Kraka and Imperial Crown Princess Royale Witti Repartee. It was a unique moment which meticulously honored tradition, yet allowed the new royals to engage in a once-in-a-lifetime volcanic explosion of self-styled creativity (Pink glittery lava, anyone?) At the final hour of the night, Empress XXVI Witti Repartee summarized her feelings: “I feel fantastic. It’s been a 17-hour blur of fabulousness!” Emperor XXI Ritz Kraka added, “It was great! There were THREE HUNDRED more people than last year!”

In New York City today, many of us believe we have “seen it all”… which was especially obvious while I was en route to The Marriot Marquis that night, surrounded by so many blaring sights and sounds. It makes this journalist commend the creators of The Night of 1,000 Gowns for making this an event that can even stand out in the city that (reportedly) never sleeps. So, let’s get back to the initial question: Just how many gowns were seen that night? My answer to that makes me think of what Holly Woodlawn (ANOTHER performer who knew about transcending gender!) retorted after being fed up with so many people asking her if she was a man or a woman: “Oh–who cares? As long as you look fabulous!” Indeed!

The Imperial Court of New York has events all year long. Visit www.ICNY.org for more info!