The very first scene in Tim Kirkman’s superb gay romantic drama Lazy Eye is a potent one. Our main character, a handsome Los Angelean graphic designer named Dean (Lucas Near-Verbrugghe), is having an eye exam for a recurrent condition called amblyopia, otherwise known as— you guessed it— “lazy eye”. His optometrist (Drew Barr) recommends new glasses with “progressive lenses” (a nicer term for “trifocals”) and also offers some well-meaning but rather stinging “reassurance”: “It’s perfectly normal for people to experience a dramatic change in vision around middle age.” Our protagonist’s reaction is a priceless flash of wordless acting by Near-Verbrugghe. It’s also a snapshot that will hit close to home to so many gay men who have reached, shall we say, “a certain age”: the moment when you learn that your 40’s are sneaking up on you. You watch the twenty-somethings jog past you, analyze your changing facial contours in the mirror, or lament your decreasing ability to piss 30 feet. But another, rather unpredictable challenge of middle age also awaits you: when people from your 20’s and 30’s pop up where and when you least expect them. And, some of those “ghosts of lovers past” may still be very sexy… 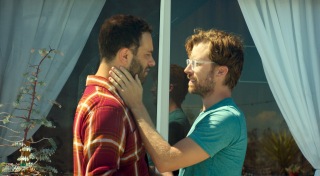 For Dean, the “ghost” comes in the form of the hot and hirsute Alex (Aron Costa Ganis). Alex contacts his ex via e-mail, reminding him how Dean turned him on to NPR and turned him on to… well, a lot of other things as well. We learn that Dean and Alex met 15 years earlier in New York City, when Dean was an artist and Alex was studying business. Dean invites Alex to spend time at his getaway house near Joshua Tree, complete with pool. Sexual chemistry is reactivated in a big way, and the two waste no time in reigniting the passions of their free-spirited youth. The characters’ explosion of re-kindled desire is amazingly captured, thanks to both the skills of the two actors and to Kirkman’s fine direction— and the resultant sex scenes are both flawlessly filmed and undeniably hot. Dean, a former Democratic Socialist (Never say “Marxist”!) who now owns an investment property, defends his career with, “A graphic designer is an artist— just one who can pay the bills”. Alex, who left the world of Wall Street, responds to Dean’s observation “I always imagined you in a suit and tie, working in some high-rise somewhere” with “I did that… until all I could think about was jumping.” Dean and Alex hit it off very well as they reminisce about their relationship, whether they’re lying naked in bed or lounging by the poolside listening to the howl of the coyotes. About 40 minutes into the movie, however, one of the characters reveals a secret which changes the dynamic between the two men— and makes the audience wonder just how much longer the two will be singing Peaches and Herb’s ageless lyric “Reunited and it feels so good…”.

Dean’s Sarah Jessica Parker-esque friend/co-worker Mel (a charming Michaela Watkins) notwithstanding, Lazy Eye is basically a two-character show. With only the two men in a relatively isolated setting, the film could have very easily fallen prey to the static staginess and/or “talkiness” of a filmed play. However, the movie is enlivened by energetic yet nuanced acting, smart dialogue, creatively shot flashbacks, and the naturally stunning California settings— particularly the gorgeous landscape of the Mojave Desert. 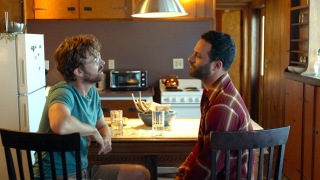 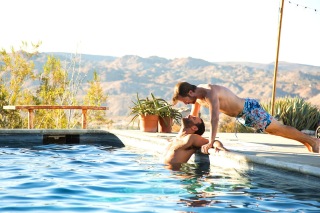 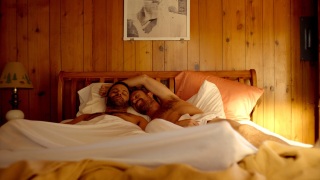 It’s a revelation to see a love story featuring two main gay male characters over the age of 35. The fact that the characters provoke so much empathy (as well as being, shall we say, so “easy on the eyes”…) makes it even more engaging. Perhaps most importantly, Lazy Eye is the furthest thing possible from any middle-aged gay male “pity party” that some may expect from the story-line. (In other words, it’s not “Man-opause: The Drama”.). What makes the characters and situations in Lazy Eye so real is the fact that these two fit and trim men barely notice the big 4-0 sneaking up on them until they are forced to make some tough emotional decisions. With the dynamics of both gay and straight relationships constantly changing as we approach 2017, the themes in this provocative drama couldn’t be more relevant.

Lazy Eye is now available on VOD and DVD. Visit the movie’s official website at www.LazyEyeMovie.com.