Five Characters and a Plague: “One Flea Spare” Returns to the New York Stage

Five Characters and a Plague: “One Flea Spare” Returns to the New York Stage

Naomi Wallace’s Obie Award-winning play One Flea Spare is set in London during a 17th century wave of the bubonic plague. Also known as The Great Plague, this epidemic lasted from 1665 to 1666 and killed an estimated 100,000 people— almost a quarter of London’s population— in 18 months. No human being was immune from catching the disease. However, class and wealth did play a role in the history of the Plague. The rich were able to leave the city, either by retiring to their rural estates or by residing with relatives in other parts of the country. Obviously, this was not an option for the poor. Since the disease was spread by fleas who lived on rats, neighborhoods with poor sanitation and crowded conditions were at a much higher risk. One Flea Spare features four characters sequestered inside a house to avoid the mysterious epidemic. In this confined atmosphere, their only connection to the outside world is an impish watchman who makes sure they don’t, ahem, “flee”. But there’s also a sixth character in One Flea Spare, albeit an invisible one. It’s the Plague itself, which hovers ominously around the stage as the audience nervously watches the quartet of wary cohabitants.

Survival, class, wealth, and fear are among the themes explored in Playhouse Creatures Theatre Company’s new production of One Flea Spare, now enjoying a run at New York City’s Sheen Center. The play is directed by Caitlin McLeod. Representing the affluent echelon of society are William Snelgrave, a wealthy but volatile elderly man (Gordon Joseph Weiss), and his long-suffering wife Darcy (Concetta Tomei). We learn that the couple’s servants have died from the Plague, and that they’ve been living in the only remaining “safe” rooms (meaning, the only rooms where no one has died…) of their Westminster house. The couples’ fragile sanctuary is disrupted by two unexpected “visitors”: a young but hardened sailor named Bunce (Joseph W. Rodriguez) and an uber- precocious 12-year old girl named Morse (Remy Zaken). Kabe the watchman (Donte Bonner) wheeler-deals all around town, waxing poetic about the Plague the entire time. He also delivers weekly bills: the chilling “Bills of Mortality”. When Kabe gets word of the two refugees, the Snelgrave house is boarded up for 28 days for breaking the “reverse quarantine”. Kabe teases the Snelgraves with “One o’clock, two o’clock, three o’clock, four. I’ve got the key to your locked door!” Reluctantly, the couple takes on Bunce as a servant, having him take on the task of ritualistically scrubbing the floors with vinegar. They adopt Morse as a daughter of sorts, because she is “one of them”— the purported orphan of their high-class friend. 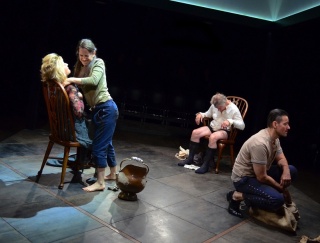 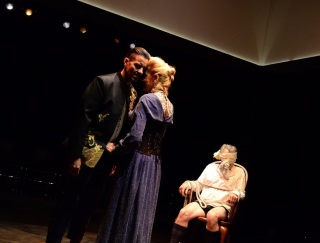 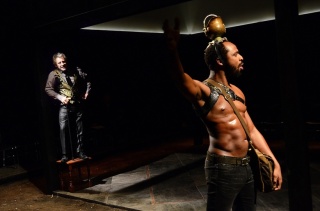 The claustrophobic environment of One Flea Spare soon takes its toll on the characters. The Snelgraves initially try to maintain their air of superiority in their home. However, the differences between wealth, class, power, and even gender roles slowly begin to unravel. Repressed carnal desire becomes intertwined with power play. The sexual tension eventually erupts into several scenes that are (most likely, by the intent of the playwright and director) more disquieting than titillating Slowly, secrets are revealed… and, in one of several climaxes, one of the characters pays a price for his unrelenting cruelty, with the other three enacting a multi-faceted revenge.

Wallace’s four main characters are savagely portrayed by the actors. Concetta Tomei is riveting. Her Darcy Snelgrave is, arguably, the only one of the four who inspires any sympathy from the audience. Gordon Joseph Weiss, as her husband, is equally excellent in a patently unsympathetic role. Joseph W. Rodriguez perfectly conveys the quietly rugged appeal of Bunce the sailor, who manages to emotionally stir both the husband and the wife in different ways. As the enigmatic Morse, Remy Zaken has the challenge of playing a 12-year old provocateur who’s both wide-eyed (literally) and cynical beyond her years. She does it very convincingly, whether it be via her superb wordless acting or her character’s blunt “bon mots”. It is her frequent uncensored wisecracks, in fact, that provide some much-needed moments of levity in the play. More humor comes from the naughty charms of Donte Bonner, who’s perfectly cast as the clownish watchman Kabe.

Those familiar with playwright Naomi Wallace know that the author has always explored challenging and sometimes difficult subject matters for her works. One Flea Spare is no exception; It’s a challenging play for the director, the actors, and especially the audience. You may have guessed by the setting that there’s little chance for an optimistic conclusion for this story. As mentioned before, there’s only a limited amount of sympathy for the characters. Fascinating as they are, they don’t engender much warmth from the audience; these four are, after all, in a form of 17th century post-traumatic stress disorder. Put another way, there’s no proverbial “hero” in One Flea Spare. However, if one of the missions of theater is to provoke, One Flea Spare goes above and beyond. The story takes place in 1665, but the themes are eerily relevant 351 years later.