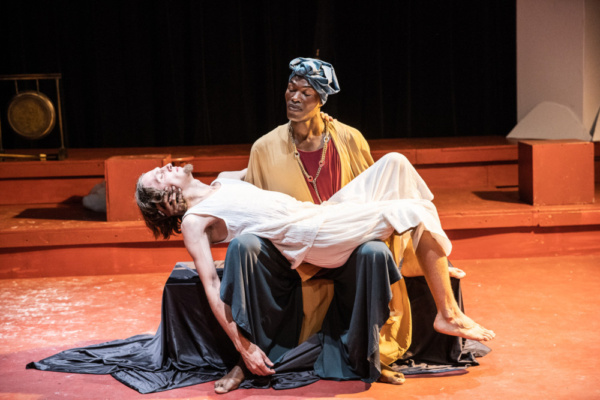 When we first meet history’s infamous emperor Gaius Julius Caesar Germanicus— better known by just his nickname “Caligula”— on the stage of the Medicine Show Theatre, the twenty-something Roman ruler (played by Richard Keyser) is grieving over the death of his sister/lover Drusilla– and, incidentally, Rome is in political/social chaos as well. After returning all dirty and exhausted from a three-day disappearance to the countryside, his dedicated servant Helicon (Perri Yaniv) gives him a sponge bath. During this intimate setting, Caligula reveals to his too-smart-to-be-doing-what-he’s-doing minion that he has quite an ambitious goal: He wants to “possess the moon”. What may appear at first like a fleeting existential crisis and/or a wide-eyed, youthful idealism soon deviates into a manic madness. Before you can say, “Friends, Romans, Countrymen…”, the emperor’s twisted philosophies become the motivation for barenaked tyranny, starting with a declaration that anyone in the empire with any sort of fortune must disinherit their children and write a new will leaving everything to the state. The rationale behind this? Caligula declares, “It is no more immoral to steal directly from the citizens than it is to slip indirect taxation into the prices of commodities that they cannot do without. To govern is to steal. Everyone knows that! But it’s a question of form. Myself, I shall steal openly.” Hmmm… Are we really talking about ancient times? But more about the modern relevance of Caligula later… 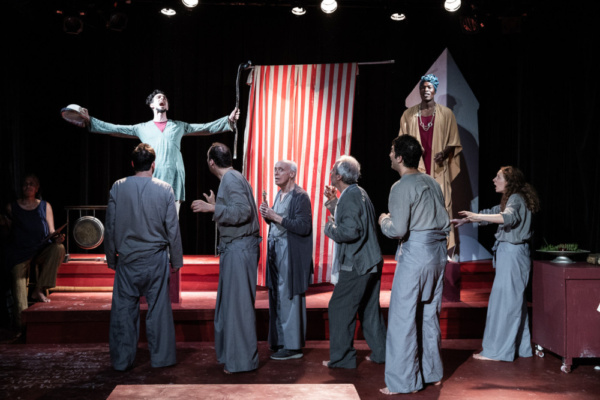 Like other versions of the same story, Medicine Show Theatre’s new adaptation of Albert Camus’ 1938 play, directed by Mark J. Dempsey in a new translation by Chris Brandt, displays Caligula the man in all his famously narcissistic insanity. Throughout pop culture history, the story of Caligula has been told in many forms, including a musical version and the notorious 1979 $17.5 million X-rated feature film. To the relief of some and the disappointment of others, Medicine Show’s vision spares us orgy scenes but does offer a particularly lively performance by a young and hardworking cast, led by Richard Keyser’s titular tyrant. It’s not long before Caligula’s contorted theories become more than JUST theory. His particular brand of lunacy would be humorous if it didn’t turn violent. And yes, kids, there’s violence in many varieties– including but not limited to assassinations, poisonings, and rape, all done with loud and flamboyant zeal. (Mercifully, much of it is simply spoken about, or happens off stage…) One character quotes Caligula: “There is no deep passion without an element of cruelty.” Caligula wasn’t kidding… Meanwhile, the motley crew of grey-clad Roman patricians meet to discuss the future of their city-state. Many are worried about their leader’s descent into madness. Unfortunately, these elders begrudgingly tolerate Caligula’s political shenanigans– likely due to fear, blind loyalty, a desire to be associated with power, or even a strange admiration for his stubborn style of ambition. Caligula’s lover is Caesonia, his self-described “old mistress”, played by actor Demetrius Blocker in a gender-bending twist. Caesonia becomes Caligula’s strikingly attractive accessory– a woman who keenly pretends to “knows her place”– by ancient Roman standards, that is. But when Blocker-as-Caesonia delivers the delicious line, “That’s very interesting– but well above my woman’s understanding”, the “wink wink” irony is priceless. Caligula also has a loyal friend, the poet Young Scipio (charismatically played by Joe Rivera), who maintains allegiance to the emperor and tries to offer a voice of reason, common sense, and intellect. Caligula returns Scipio’s bromantic love with unyielding sadism and even worse. As we learn in the play’s conclusion, neither the patricians, Caesonia, or Young Scipio can keep the emperor from self-destruction in this ageless play about “superior suicide”– foreshadowed by Caligula’s declaration, “It’s easy for me to kill, because it’s not hard for me to die…” 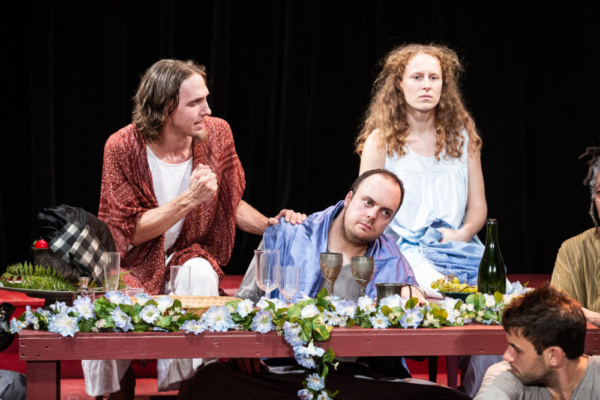 The timing of this lively production of Camus’ play couldn’t be more perfect. Had audiences seen Caligula a generation ago, the play may have been viewed as an episode in a historical miniseries called “Those Crazy Romans”, where the effects of incest, drinking wine from lead cups, and political chaos would explain just why Rome fell. Some of the characters make observations that would be just as valid in our day and age, as when one man declares, “It’s easier to tax vice than it is to hold virtue.” But other parallels between the themes in Camus’ play and life in 2018 are downright eerie. The message about the making of a tyrant becomes blindingly obvious, much like Shakespeare’s equally timeless Julius Caesar. How do we make a tyrant? Start with a loud, narcissistic, over-the-top bully who’s not afraid to offer “alternative facts” in place of established truths or intelligent theories. Surround him with sycophantic supporters who are driven by that aforementioned fear, blind loyalty, desire to be associated with power, and/or strange admiration for a stubborn style of ambition. And don’t forget to have our “leader” stage some over-the-top public appearances which offer more self-serving theatricality and queasy “entertainment” than actual substance. As the audience will discover in Caligula, those are only SOME of the similarities…

Richard Keyser plays the lead role as a young man with a psychotic sense of abandon, with the added sense of immature fearlessness that you’d find in a spoiled rich kid who has too much allowance to spend. (Now, THAT’S scary…) As Caesonia, Demetrius Blocker is stunning to watch. Playing the emperor’s “kept woman”, the actor’s height and larger-than-life presence is at first a bit overwhelming– but after that first appearance, Blocker plays the role of Caesonia with great conviction, complete with fine moments of wordless acting: He is able to stare into space without saying a word, yet still speak volumes. In another gender-bending twist, Janine Georgette plays the male character Cherea, a no-nonsense, deadpan prophet of the future as well as a solidly imposing voice in Caligula’s palace of absurdity. It won’t take long for the audience to realize early on that Georgette’s Cherea will be a force to reckon with later on. Joe Rivera is fascinating to watch as Young Scipico, particularly in the intense scenes when he’s one on one with Caligula. In the pivotal role of Helicon, Perri Yaniv is also excellent. The leads are surrounded by an energetic and hard-working supporting cast. 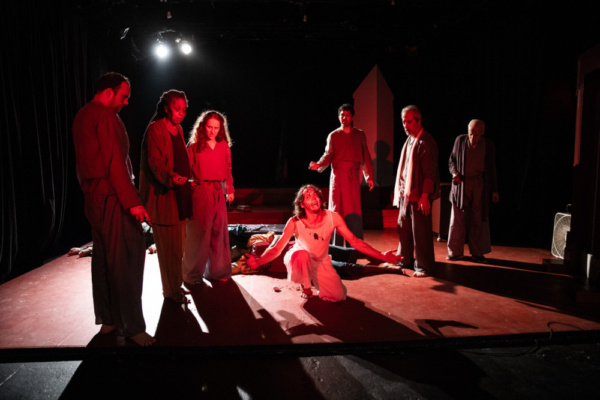 How much modern audiences will appreciate the play may depend on just how much of Caligula’s insanity and cavalier displays of cruelty that they can take. Still, the more shocking aspects of the story of Caligula will be rivaled by an even more shocking truth: Human nature, for better or worse, hasn’t changed much through the centuries. And that’s NOT an alternative fact!