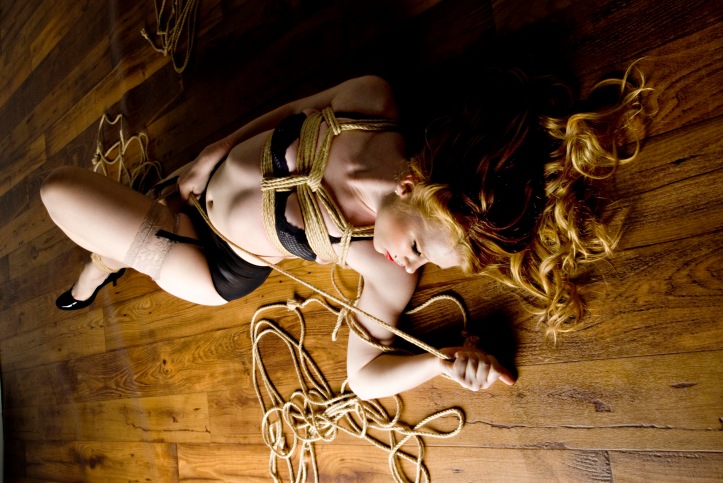 How could you not love a host who calls herself “your kinky neighbor next door” and follows up with an even more enticing promise: “I’m the sexual revolution you’ve been waiting for!” Madison Young is that host– and the first episode of her new, highly original series Submission Possible makes its Word Premiere on Saturday, June 20th, courtesy of the LGBTQ+ virtual cable TV network Revry. 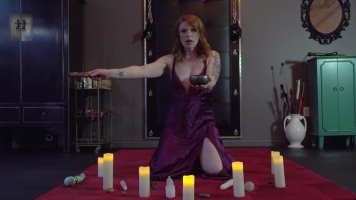 The first thing we notice about Young (who also executive produced and directed the series) is just how striking she is to look at, with her Titian-colored hair and alabaster skin. However, even more enticing is the look of sheer adventure in her eyes. The viewer learns that Madison– who is also a feminist submissive, sex educator, author, activist, artist, and award-winning maker of erotic films– has been exploring kink for 20 years. But in the spirit of any hungry heart, she wanted to take it even further. So what does any untamed soul do for inspiration? Pack a suitcase or two (or maybe three, if you’re bringing your toys), buy a plane ticket, and kick off on a world tour to discover some new hues of kink. The first stop? New Orleans, Louisiana!

Clearly one of the most unique cities in America, New Orleans is a culture of unapologetic decadence in an otherwise conservative red state in the Deep South. It has had decades of influence by innumerable ethnicities, religions, and traditions. N’awlins, as tourists like me would call it, also has a famous reputation for having a strong vibe of mysticism and magic.  According to several people who share their personal ghost stories, it is VERY real! Madison speaks with a diverse group of participants who discuss sex magic, aphrodesiacs, spectrophilia, and more– all through a decidedly queer, feminist, sex-positive, and pleasure-egalitarian lens. As diverse as they subjects are, all of them share one common trait: In the spirit of the series and of Madison herself, none of them are afraid to speak candidly about some titillating subjects.  Those subjects include but are certainly not limited to: heightening the masturbatory experience, the magical power of the vagina, and the still-misunderstood concept of sexual fluidity. (As one participant states, “I like hearts, not PARTS.”)  But Submission Possible is not just about titillation. Yes, Virginia, you WILL actually learn something.  And remember: Knowledge makes you intelligent… and intelligence is SEXY!

Madison’s first subject is Elise the Beast, who owns the title of Mx. Phoenix 2019. Phoenix, we learn, is the city’s most predominant Leather bar and, in the wider LGBTQ community, “one of New Orleans’ kinky queer institutions”. Elise is a wise choice of colorful characters to kick off with: From her fiercely self-styled look to her articulate style of speaking, she is beguiling to watch as she recalls Rocky Horror Picture Show as the first time she related to the kink community, including how Tim Curry was her first sex dream! She also speaks with ecosexual sex magician, Sura Hertzberg; and Gypsi San Diego, an “herbalist, healer, and sex witch”, where one of the topics is aphrodesiacs.  Madison also gets up close and personal with Ashton Young, a “sex witch, kinkster, and tarot reader”.

The series is sharply shot in superiorly high definition.  Watching the show is really like being there in person with Madison. The camera work is quite animated: The interviews never feel static or freeze into the documentary trap of becoming “talking heads”. In addition to some eye-popping authentic locations (including Cafe Lafitte in Exile on Bourbon Street, which opened in 1933 and claims to be the oldest gay bar in the United States). But most importantly, Madison Young is a truly magnetic host. She’s always bewitching, whether she’s rolling around in a floral print dress in the throws of aphrodisiac-induced sexual ecstacy or in head-to-toe fetishwear.  Judging from Episode 1, Submission Possible promises to reawaken all six senses– and maybe even discover a few new ones along the way.  Best of all: For this trip, we’re ALL allowed to come…