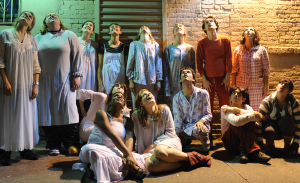 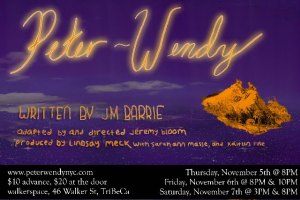 There’s a priceless moment in “Peter-Wendy”, Jeremy Bloom’s avant-guarde vision of the classic fairy tale, where Wendy Darling (Heloise Darcq) asks Peter Pan (Christpher Heijl), “How old are you?”  Peter (Not to get too familiar too quickly, but “Mr. Pan” just doesn’t seem appropriate.) answers, innocently, “I don’t know….”  Granted, asking an audience to suspend their disbelief is a staple of theater; but for that moment, the attendees of “Peter-Wendy” no doubt viewed the actor on stage as being truly ageless; We were transported away from the unyieldingly concrete “real” world where age is a persistent obsession of our society.  It made this reviewer ponder how great it would be if, beyond the world of theater, all of us could just “forget” our ages at least temporarily– and not be bound by the tyranny of a numerical value.

That’s part of the essence of Peter Pan: The boy, raised by fairies, who refused to grow up. The literary character who spawned three movies (A silent version in 1924, the Disney animated film in 1953, and a live-action British film in 2003), as well as frequent stage revivals and innumerable references in pop culture.  At the foundation of Jeremy Bloom’s new reinterpretation of the familiar story is J.M. Barrie‘s text.  Bloom is completely faithful to the author’s original literature, incorporating prose from Barrie’s 1911 work “Peter Pan and Wendy” as well as “The Little White Bird”, the 1902 adult novel where Peter Pan originally appeared.  The text holds up remarkably well, including some truly riotous (judging by the audience’s reaction) dialogue where Captain Hook laments his own villainous reputation (Specifically, Hook bemoans how children never want to be Hook when they “play Peter Pan”…).  The timeless words, recited by various members of the cast throughout, is bolstered by artful lighting, occasional songs and dance-like movements, and original music by The Books which plays throughout the performance.  Bloom also features some renegade casting: Wendy is played by Heloise Darcq, a French actress with a thick accent to prove it.  Captain Hook is portrayed by actress Joyce Miller, who gives the audience her lines with a menacingly deadpan– and often hilarious– delivery.  Eschewing the traditional green tights and feathered hat that Peter Pan wore in the Disney movie (and on the peanut butter jar), Bloom’s vision of Peter wears tight red PJ’s.  The entire cast, in fact, wears pajamas or nightgowns.  More importantly than what they wear, however, is that the actors of this large, multi-ethnic cast are all clearly in touch (make that very, very in touch) with their child inside.  Audiences will likely undergo a similar reconnection after seeing “Peter-Wendy”.  The characters are pretty much the same as we remember them, as is the plot.  Although two guesses won’t be necessary as to who will emerge victorious in the showdown between Peter Pan and Captain Hook, what’s less clear is Wendy’s climactic decision: Will she go with Peter to live in Neverland, or will she return home, knowing she’ll eventually have to become an adult?

While clearly over the age of 18 (A renegade decision of sorts, since Peter Pan on stage was often played by an adult woman…), Christopher Heijl as Peter is appropriately boyish; and, cocksure as his Peter Pan is supposed to be, his character is magnetic.  Heloise Darcq, by contrast, comes across more as more of a woman-girl– simultaneously adult and child– which suits her take on Wendy extremely well.  It’s been long-debated as to whether Peter and Wendy had some type of romantic feelings for each other; or if Peter saw Wendy as a mother figure, or if there may have been some combination of both (Can you say “Oedipus complex”?).  Intentionally or not, the verdict is simmeringly undecided, especially with the physical attributes of the two leads.  You’ll have to decide for yourself!

The most striking aspect of “Peter-Wendy” is how the piece moves so smoothly.  Bloom’s intertwined spectacle of drama, comedy, movement, and music flows together like a well-choreographed dance.  At its heart (a big one, at that) is a celebration of the power of childhood and how all of us need to revisit innocence once in a while.  In the play, Peter Pan instructs Wendy that to fly, we need a combination of pixie dust and happy thoughts.  While most of us living in the urban jungle we call New York City may be skeptical of pixie dust (as well as fairies, mermaids, and Lost Boys…), it’s clear that happy thoughts can ALWAYS lift us up… even outside of the fantasy world of theater.

“Peter-Wendy” is playing at Walkerspace at 46 Walker Street through November 8th.  Showtimes are Saturday and Sunday at 3PM and 8PM.  Tickets are $20 and are available at www.BrownPaperTickets.com or at the door.  Visit www.PeterWendyNYC.com for more.