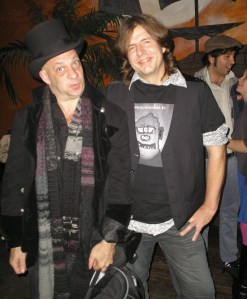 HOT BABES IN TOYLAND
Nutso in the North Pole…

Every so often, a new holiday-themed musical comes along that re-warms our hearts, re-inspires visions of sugarplums dancing in our heads, and reminds us again of the real meaning of Christmas!

“Hot Babes in Toyland”, directed by Jeremy X. Halpern, is not that musical. Tis true, many of our familiar “North Pollacks” are here: Santa, Mrs. Claus, Rudolph the red-nosed reindeer, and the elves.  However, this singing and dancing Christmas cracker of a show is more in the tradition of the infamous “Spirit of Christmas” South Park episode rather than the annual Claymation holiday cornfests you remember as a kid.  We get introduced to “Hot Babes in Toyland” with some standup comedy of sorts from a trash-talking Rudolph (Michael Zartman), self-proclaimed “star of screen big and small”.  This Rudolph has a thick Brooklyn accent with attitude to match.  He refers to his boss– not affectionately, I might add– as “Santa Fucking Claus”.  Rudolph proceeds to give the audience a punk-flavored anthem of angst called “Christmas You Piss Me Off”.  Then it’s on to the story, boys and girls: We meet Sprinkles, a seriously neurotic elf (played by Alena Acker, who looks eerily like late XXX film star Linda Lovelace, right down to that same “all-American girl gone bad” look) who’s got he serious hots for Santa Claus (Kelly Johnston).  Sprinkles serenades Santa with “All I Want for Christmas is O”– “O” as in orgasm.  But Saint Nick resists her advances, instead working on his new endeavor: replacing all his elves with– supermodels!  One of them is a stacked sexpot named Heavenique (Sierra Carrere), and the other is a dark-haired beauty named Serendip (Maia McCann) who is, shall we say– “more than a woman” (Think “The Crying Game”).  Oh, the drama!  Will this island of misfit toymakers get their act together in time to deliver the goods on Christmas Eve?  Will Sprinkles snare Santa?  Will this taboo-busting Christmas tale at least have a happy ending?  You’ll find out… but along the way, the term “biscuit” (a little person with a big schlong) enters the audiences’ lexicon, and we also get to hear more future holiday-themed hits.  These include “Santa Claus is Coming Again”, as well as “Rudolph the Alcoholic Reindeer”, sung by Mrs. Claus (also played by Maia McCann, who reinvents Santa’s spouse as something of a New Jersey housewife with very distant family ties to da mob).

With its (deliberately?) cheesy set pieces and costumes, along with outrageous and occasionally blasphemous dialogue and situations, this reviewer concludes that if filmmaker John Waters (“Pink Flamingoes”, “A Dirty Shame”) created a Christmas special for TV, it would probably look a lot like “Hot Babes in Toyland”.  There’s no shortage of raunchy fun, but the show is hampered just a bit by its brevity (Its running time is just under an hour long.) and some gaps in production values (Couldn’t the producers get a bona fide little person to play Elfis the Elf?  Or maybe a real short guy with a big schlong to play the “biscuit”?).   “Hot Babes in Toyland” is not recommended for anyone who considers jokes at the expense of Jesus, Santa, Christmas, or Mariah Carey‘s music to be “off limits”.  It is, however, recommended for anyone who prefers their holiday-themed entertainment to be more naughty than nice!