SEE IT! THE DIARY OF ANNE FRANKENSTEIN: Theater Review 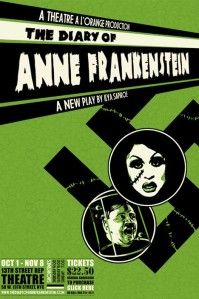 THE DIARY OF ANNE FRANKENSTEIN
Debauchery in Deutschland!

Germany, 1945.  In a top secret laboratory tucked deep within the Bavarian Alps, demented Nazi scientist Gustav Frankenstein (Joseph Beuerlin) and his childlike assistant/nephew/creation Fritz (Geoffrey Borman) are hard at work at two rogue projects.  One of them is the creation of an ultra-Caucasian “Anne Frankenstein”– “the very first instance of supreme female perfection”.  At first, it seems like a success: Anne (Mimi Imfurst) comes off the lab table with blonde hair, pale white skin, and breasts “like two snow-specked hilltops each sprouting the first rosebuds of summer”.  However, this perfect specimen of a woman also has… shall we say, a little something “extra”!  Horrified at their cross-gendered creation,  Anne gets shut away in an attic.  Her sole companion is a talking, singing diary (Lavinia Co-Op) who continuously offers Anne some fairy godmother-style advice.  Anne may be locked in an attic, but fear not, kiddies: This isn’t the last we’ll see of our hermaphrodite heroine.

Meanwhile, the “wurst” is yet to come!  Our nutso Nazis are working on their sinister second project:  finding the perfect body to attach to Adolf Hitler’s head (Ryan Feyk), which has been kept alive in a jar (a la “The Brain That Wouldn’t Die”).  Opportunity knocks– literally– when an pair of stranded American tourists come to stay the night: narcissistic movie star Sylvia Beasley (Jessica Caplan) and her henpecked, blandly attractive husband Paul Perrit (Eric Jaeger).   Dr. Frankenstein wants Paul’s body… to attach to Hitler’s head.  Her sexual appetite awakened, Anne Frankenstein also wants Paul’s body… for different reasons.  In turn, Paul falls hard for the blonde Franken-tranny in what’s truly the most unorthodox love story to hit the stage in years.  The plot thickens… and sickens.  Will Paul leave his shrewish wife for Anne Frankenstein?  Will forbidden love triumph?   Will Adolph Hitler’s wretched soul rise again?

“The Diary of Anne Frankenstein” self-indulgently combines elements of Mary Shelley’s timeless classic with traces of  “Alice in Wonderland” (One of the main characters is a talking book, after all!), “The Rocky Horror Picture Show”, and a good dose of filmmaker John Waters’ sick and twisted style of humor.  Indeed, Mimi Imfurst’s Anne seems at times to be an antecedent to Divine in Waters’ 1970 shocker “Multiple Maniacs”.  The entire cast are over-the-top cartoon characters come to life, and all perform with gusto.  Joseph Beuerlin, as the seriously demented Gustav Frankenstein; and Lavinia Co-Op, as the Diary, are especially excellent.  Co-Op’s two musical numbers are standouts.  In the title role, Mimi Imfurst proves herself to be a talented, in-your-face comedienne.  Combine the high-energy cast with Ilya Sapiroe’s hilariously raunchy dialogue and outrageous situations, and you have a “Diary” that’s off-off-Broadway’s best kept secret.  Tell your freunde!

“The Diary of Anne Frankenstein” is now playing at the 13th Street Rep at 50 West 13th St. (between 5th and 6th Aves,) through November 29th.  Showtimes are Thursdays and Saturdays at 9PM, Sundays at 7PM.

And join Under the Pink Carpet TV as they go to the show and behind the scenes,, at: www.youtube.com/watch?v=V20Pyl09NXk 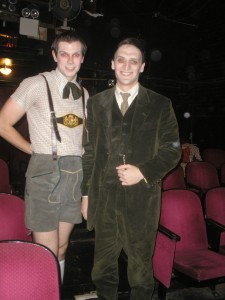