(Black and white photo of Greisinger by Chris Skelley of The Rangers.)

It may seem like an over-generalization… but from what I’ve observed, the men of The Buckeye State take their harnesses and boots VERY seriously. CLAW (Cleveland Leather Awareness Weekend), held every April, is one of the largest Leather conventions in the country, always selling out its host hotel and attracting Leathermen and Leatherwomen from all over Ohio, the U.S. at large, and Canada as well. Cincinnati, about 243 miles southwest of Cleveland, is the location of The Annual Tri-State Leather Contest every November. And statewide, there are enough events both big and small to keep even the most ambitious daddies and boys busy all year round. Not to be excluded, Akron, Ohio (Nicknamed “Rubber City”; I knew I liked that town!) was the host city for the Iron Eagles MC and Rangers Inc. Joint Run in early October. The wild weekend included live entertainment, community awards, bar crawls, cocktail parties, after-hours events, and much more… with the climax being the Mr. Ohio Leather 2011 Contest on Saturday, October 9th. Four leathermen– all dedicated members of the community (and, interestingly, all blue-eyed)– competed for the envied Mr. Ohio Leather 2011 sash. In the afternoon, the Contestants underwent an interview session with the Judges for the GLBT press. In the evening, the four guys got to strut their impressive manstuff wearing both Bar Attire and Formal Leather… and later on, they got to strut their stuff wearing significantly less for the audience’s favorite segment: Pecs and Personality! I have no doubt that any of these four, shall we say, “easy-on-the-eyes” men would have indeed been a great role model and activist for The Leather Nation. It was ultimately Columbus native Mike Greisinger, AKA Den Daddy Mike, who was determined by the Judges to embody the seven cornerstones of Ohio Mr. Leather: fraternity, service, action, leadership, kindred, community, and legacy. The 5’11’’ Greisinger knows that he has a busy year ahead. He gave an exclusive interview to Jed Ryan about what’s up ahead for the Leather community in his home state as well as The Leather Nation at large:

JR: Hi, Den Daddy Mike. Congratulations on your win! What was the first feeling you got when they announced your name as Winner?
MG: Winning Mr. Ohio Leather 2011 was incredible. My feelings at that moment were a rush of happiness, excitement, and even a little relief. I had so much support from so many people.  I am simply very proud to have earned the honor to represent such an amazing group of people.

JR: In your opinion, where does the Leather lifestyle stand now? A lot of guys have speculated that a new generation is discovering the scene, and we’re due for a renaissance. Do you think that’s true?
MG: I certainly think that we are on the verge of a “reawakening” of sorts. There is a lot of interest in Leather from outside the community, especially the gay youth who are struggling to find where they belong in society; but there is also some uncertainty and misunderstanding of what the Leather community stands for. As members of that community, we owe it to our youth to help them find strength in who they are– and the Leather community is a great place to do that.

JR: How true! So, what can all of us do in the Leather community do, on a day to day basis, to keep the lifestyle thriving?
MG: As I said in my speech during competition, it comes down to honor, respect, and dignity. The Leather community will continue to thrive by being a community of honor, standing by our beliefs, and standing by our words. By not only being respected, but being respectful of others. And, by being dignified: proud of who we are, our ideals, and where we come from.

JR: What cause or issue do you want to focus on during your run?
MG: There are so many important issues in not only the Leather community, but in the LGBT community as a whole. My focus during this year is to build on the legacy of my predecessor, Mr. Ohio Leather 2010 Jim Delong, and the amazing work he’s done with food drives in Cleveland. I’m going to work to bring that sense of community to Central Ohio as well. Jim has done an unbelievable job, and I’d like to continue that as a focus of the Mr. Ohio Leather title. Additionally, I am hoping to become an ambassador for the Leather community throughout Ohio.

JR: Sounds great!  Now, a lot of guys look at Leathermen as the epitome of masculinity and sex appeal. As an bona fide expert on the subject, What makes a guy sexy?
MG: Bona fide expert, eh? That’s quite a compliment Jed, especially since I am still single… What makes a guy sexy? Being “sexy” is so many things to so many guys. Obviously there is that physical attraction, but that’s not always enough. I mean, we’ve all seen that hot man from across the bar, you approach him to say “hi”… and when he opens his mouth, both a purse and the matching shoes fall out. (Jed laughs.) For me, it’s not just a man’s looks, but also his confidence, and his ability to carry on a conversation…not just his ability to speak, but to listen too. I think those are things that really turn me on… well, that, and knowing how to kiss as well as being great in the sack, but that’s another story.

JR: I can’t wait to hear it!  Now, a lot of those reading this will want to know: Where can people see and/or meet you in person next?
MG: I’m going to be doing a lot of travelling all over the state this year, and a lot of plans are in the works. I will be in Cleveland for a food drive the weekend of Nov. 5th, and I will be attending the Mr. Tri State Leather contest on Nov. 13th. Additionally, I am working on putting together a series of podcasts to discuss and address issues in the Leather community. I can also be reached through my Facebook page, MrOhioLeather2011, where I’ll be updating events and appearances, and through my email address: MrOhioLeather2011@gmail.com. 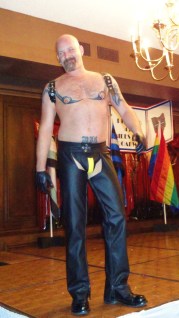 (Photo 1: Mr. Ohio Leather 2010 Jim Delong passes the Sash to Greisinger.
Photo 2: The Contestants during the Interview with the GLBT press.
Photo 3: Greisinger during the “Pecs and Personality” segment.)