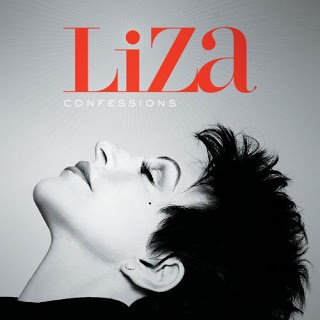 Did Ms. Minnelli’s jaw-dropping cameo in “Sex and the City 2” have you begging for more Liza? The enduring gay icon has a new album, named “Confessions”. It may as well be subtitled “All That Jazz”. For her first studio release in almost 15 years, Liza does jazz/pop-flavored covers of 14 so-called “American classics“. Minnelli reportedly recorded this album in her bedroom before and after her knee surgery last winter. She has stated that she wanted the album to have the vibe of when she entertains guests at her home, when everyone starts performing around the piano. (Where was MY invite?!) How much you’ll go for Liza’s new endeavor will depend: not only if you’re a jazz aficionado, but also on how much you accept the, shall we say, “maturation” of Liza’s voice. “Confessions” pushes her ripened yet still-distinctive vox to the forefront. It‘s astonishingly up-close-and-personal, and the producers admirably restrain from smoothing over any of her vocal “imperfections” with electronic skills. True, she’s still unmistakably Liza, and she still has her trademark Liza-esque dramatic crescendos and bridges. However, the diminutive dixie dynamite who was the toast of the ’70’s (If you want to hear Liza in all of her Studio54-era prime, find the 1977 unsung gem “Tropical Nights”.) now sounds deeper, more grainy, and more like a world-weary chanteuse than a wild child. The rawness and the intimacy of it all actually suits the jazz genre perfectly. You’ll imagine you‘re listening to our Liza in a tiny, dimly-lit smoky downtown club… even though New York City’s clubs have been smoke-free since little Justin Timberlake was commanding you to “rock your body“ back in 2003. “Confessions” is basically a collaboration of Liza’s voice and the always reliable piano work of Mr. Billy Stritch, her longtime collaborator– who we believe could play this music in his sleep. Skip the silly opening track, the Howard Dietz/Arthur Schwartz “Confession” (a song considered, believe it or not, quite racy in its heyday). Move on to the delightful Cy Coleman/Carolyn Leigh “You Fascinate Me So”, a highlight on the album where Liza‘s clearly enjoying herself. As for the CD as a whole, Liza fans will probably eat it all up. That said, most of the music — intentionally or not– doesn’t break any new ground. The exception is Bernice Petkere’s “Close Your Eyes”, which incorporates some appropriately hypnotic sound effects to make this another highlight of the CD. It shows what a little musical creativity can do for a classic. The Peggy Lee/Francis J. Burke “He’s A Tramp” (dedicated to all those ex-boyfriends out there) is also a campy, guilty pleasure… and later on, it‘s almost surreal to hear Liza warble, “Twas such a night as this, When Judy Garland swore, ‘I just adore him, How can I ignore the boy next door?’” on the Marshall Barer/Hugh Martin “On Such a Night Like This”. Wow! Liza appropriately goes all-out on the finale, Harry Warren and Mack Gordon‘s “At Last”. And, before you ask, Liza’s version of “All the Single Ladies” is NOT on this CD.  Sorry!