CHANNING, IS THAT YOU? 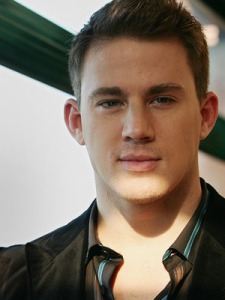 CHANNING, IS THAT YOU?
Hollywood’s newest It Boy Channing Tatum is everywhere lately.  The 29-year old star of this summer’s big budget popcorn fllick “G.I. Joe: The Rise of Cobra” has no less than eight (!) movies on the way and/or in pre-production.  He’s also currently playing coverboy for “GQ” Magazine.  How appropriate, considering that Tatum was a fashion model before turning to acting.  He modeled for Abercrombie & Fitch, Dolce & Gabbana, Nautica, American Eagle, Emporio Armani, and Aeropostale.  Not content with just standing and posing, he moved on to acting in commercials before his big break: being cast in Ricky Martin’s video for “She Bangs”. On the big screen, Tatum helped make the teen-oriented 2006 flicks “Step Up” and “She’s the Man” into modest hits, and then went other roles in both independent and major studio films  But it seems that somewhere along the way, the 6’2″ hottie apparently dabbled in other areas of showbiz as well: At age 18, he performed in a Chippendales-style revue called Male Encounter at a now-closed Florida nightclub under the stage name “Chan Crawford” for about a year.  You can watch the video of Channing plying his trade, courtesy of Us Magazine (The more salacious content of his act has been censored, unfortunately…):
http://www.youtube.com/watch?v=RtIeUO6KBTc

Channing Tatum is going to be one of the busiest guys in Hollywood in the next few years…so, it’s unlikely he’ll be going back to stripping any time soon– unless it’s for a role. (Chances are he’ll get paid more than the $50 a night plus tips that he got paid back then…)  In the meantime, Tatum’s fans will have to be content with the actor parading around in his briefs in the 2008 war drama “Stop Loss”, or being frequently shirtless as a street hustler in the new-to-DVD “Fighting”.